US Amateur: The Country Club

I was pretty excited to learn that the USGA US Amateur was going to be held right in my backyard this past week, at the famous The Country Club, in Chestnut Hill, Massachusetts.

You know your country club has to be pretty sweet, when it can just go by The, right?

The play was great, of course, as a new golfer, I love to get out on the course and see how some of the real pros do it, and it was no exception at the Amateur. These guys, most of them college aged (and some even younger), handled the course and the crowds pretty well.

But, my real excitement in going was actually to check out The Country Club, one of the most exclusive in the country. Let’s take a peek. 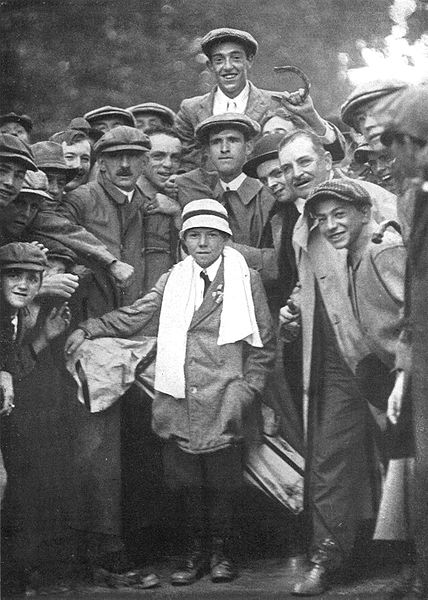 Francis and Eddie after winning the 1913 US Open at The Country Club.

The Country Club: Some Background

If you have read the book by Mark Frost, or seen the movie with Shia LaBeouf called The Greatest Game Ever Played, then you are familiar with the story. But, I’ll give you a quick recap.

Basically, the 1913 US Open was held at The Country Club and was to pit famed British golfers Harry Vardon and Ted Ray against each other for the championship. Incredibly, a 20 year old Francis Ouimet, a poor local boy who had grown up being a caddie at The Country Club was invited to play in the open by the then USGA president.

Ouimet showed up with his caddie, a 10 year old named Eddie Lowery, and proceeded to shock the golf world, hanging in with Vardon and Ray until the end of the regulation 72 holes and into an 18 hole playoff.

Winning the playoff round by 5 stokes, Ouimet went on to be crowed the US Open champion, the first Amateur to ever do it, and helped increase the popularity of golf around the United States, which at the time was seen as a sport for only the upper class.

The Country Club has been home to a number of pretty incredible events since that famous US Open, including 5 US Amateurs, 2 US Opens, 2 Walker Cups, and the 1999 Ryder Cup. As one of the original 5 charter clubs that founded the USGA and one of the first 100 clubs in America, it has quite the pedigree.

So, you can see why I was so excited to be able to get in on the grounds and check it out! All of the scoring was written by hand, the certainly value tradition here.

US Amateur: The Course

I grabbed my ticket for the Amateur on Wednesday and headed over to Chestnut Hill. Even though this was going to be the round of 64, there were still a good amount of people in attendance, and some of the top ranked guys had crowds of a couple of dozen people following them. I walked between a couple of holes, just to get a lay of the land and check out the terrain of the course. The grounds at The Country Club were really something else, very lush and green, with a lot of varied terrain, golfers had to navigate plenty of bunkers, water hazards and elevated greens to be able to make a go at moving ahead to the next round.

I started the day around the 11th green, it gave a perfect view of the course, and was actually the site of Arnold Palmer’s loss in the 1963 US Open when his ball landed in a tree stump!

I found the course to really be set up well for spectating. Even though it is over 7,000 yards, there it was an easy stroll, especially in the middle of the course, to walk from tee box to green and get a different view. View from the large rock formation on the right side of the fairway on the 9th hole, “The Himalaya.”

My favorite hole might have been the 9th, which is dubbed The Himalaya because you start at an elevated tee box that has a pretty good drop down to the fairway. On one side of the fairway is a huge rock formation and the fairway itself presents a challenge because not only is it really sloping, but there is a stream directly in the middle of it. Most players I saw had to lay up before the stream, then take 2 more shots to hit the green, which is elevated on a steep hill behind a few bunkers.

The final stop of the day was to check out some play on the 18th green. There I found the largest crowds of the day, including a big set up by the Golf Channel, which had a number of cameras and live reporters hovering around the green. Talk about pressure! Crowd at the 18th green, with the clubhouse in the background.

Beyond the Golf Channel, the second biggest contingent was a crowd from Oklahoma State University, who were hard to miss in their bright orange outfits, clearly taking a page out of the Rickie Fowler book of fashion.

As timing would have it, by the time I got to the 18th green, there was a close match going on between OSU’s Jordan Niebrugge  and Georga Tech’s Seth Reeves, who was able to just beat out the favorite Niebrugge by a stroke that came down to the puts on the 18th in order to advance to the round of  32. Needless to say, the OSU fans in the crowd were pretty disappointed.

All in all, I had a great day out at The Country Club, watching a bit of golf, and really enjoying strolling the course. If you do manage to get an invite one day, I highly recommend taking it!