When Sean wanted to get started on his quest to play the Golf Digest list of the Top 100 golf courses, he looked to find anyone else who might have done it.

With a quick Google search all signs pointed to Steve, who might be more recognizable by his online name, the Itinerant Golfer, who is currently documenting his journey on his new site Golf Tripper.

And, with the Ultimate Golf Road Trip coming up, and 15 top courses scheduled to be knocked off the list, our chat with Steve couldn’t have come at a better time.

At 88 out of 100 courses, Sean figured Steve had to know exactly what was up, so he made a perfect choice for the next session in the Breaking Eighty interview series. 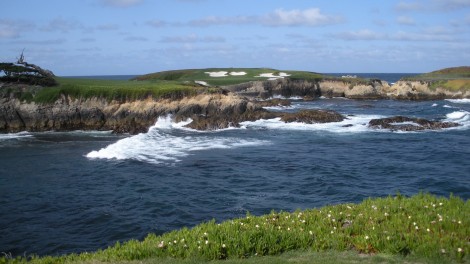 Beautiful shot of the 16th at Cypress Point Club.

Playing the Top 100 Golf Courses with the Itinerant Golfer

Breaking Eighty: What’s your background? Do you work in the golf industry?

Steve: I started playing golf when I was 9 years old, but it wasn’t really a passion for me back then. After high school I took a break from the game and rediscovered it as an adult in my early 30s when I found myself with some free time on my hands. I started playing regularly at that time and was bitten by the bug pretty badly.

I’ve been playing very regularly for almost 10 years now and for the last six years I’ve played over 100 rounds a year . . . hopefully my boss won’t read this!!

I’m not affiliated with the golf industry at all. I’m just a regular guy who loves golf and enjoys traveling to see different courses. I have a completely run of the mill and uninteresting job selling advertising space in a regional association magazine. Maintaining TheItinerantGolfer.com is far more fun and interesting that what I do for work!

Breaking Eighty: When did you first get the idea to play the Top 100 Courses and how did you get started?

Steve: One of my friends got invited to play Shinnecock Hills in New York and had an opportunity to bring someone with him. He invited me along and I was such a neophyte that I didn’t really understand what a big deal it was. We had a great time playing with a member who really went out of his way to be a great host and make the experience special.

When I returned home after that trip I stumbled across the Golf Digest Top 100 list and thought that I should try to play them all.

To get started I just went through the list and tried to figure out which courses I might have a chance of playing. I had played 2 public courses and one private on the list when I officially began the quest.

There was only one other private course on the list where I knew a member so I decided to focus on the public courses and see if I could get lucky with a few of the private courses. One thing led to another and here we are today! An incredible bunker at the 18th at Sand Hills Golf Club.

Breaking Eighty: Have you started to get jaded with the courses, after seeing so many?

Steve: I love playing golf anywhere and any time, so I’m always excited to see a new course . . . or a course I’ve played before for that matter.

Over the last six years my personal preferences have certainly developed quite a bit more, and there are certain styles of courses that I prefer over others, but I still get excited every time I tee it up no matter where I am.

Golf is such a great game that to take it too seriously or get snobby about where you play is kind of missing the point, in my opinion.

Breaking Eighty: Have you done anything specific to grow or market The Itinerant Golfer website?

Steve: I have never done anything at all to market TheItinerantGolfer.com. All the traffic on the site has been word of mouth or organic search from Google. I’ve been very lucky that Google seems to like me and I’m ranked pretty high on a lot of Top 100 related searches.

It’s been fun watching it grow over the years. I remember the days when I would look at the traffic report for the site and there were 12 visitors a day . . . and I knew who every one of them was!

When the new site (GolfTripper.com) launches in late September I’ll be doing quite a bit more to promote the site than I ever have before. The new site will be much less of a blog and more of an information depot for people who are interested in traveling and playing golf.

Breaking Eighty: Obviously some of the private courses are difficult to get on, do you have any advice on how to play them?

Steve: There is no magic trick that gets golfers onto private courses . . . at least not that I know of. For me it was a matter of telling everyone I know and everyone I met what I was doing. Sometimes a connection comes from a place that you least suspect, like a person who doesn’t even play golf.

I was surprised at how many people wanted to help and had an uncle, college roommate, neighbor or co-worker, etc. that is a member at a Top 100 club.

There is really no secret to success for playing the exclusive private clubs on the list. A genuine love and interest in the game as well as a little good old fashioned friendliness along with a willingness to pay your guest fees goes a long way. The 8th at the Olympic Club (Lake Course), pretty lush.

Breaking Eighty: What’s been the biggest surprise during the experience?

Steve: The golf community has been the biggest surprise. The support I’ve received from golfers who want to help me reach my goal is truly amazing. People I had never met before welcomed me into their clubs and, in some cases, even their homes.

It’s really very humbling and something that I didn’t expect. If I’m able to accomplish my goal of playing all Top 100 courses there is no question that I could not have done it without the support of the amazing spirit of the golfing community here in America.

Breaking Eighty: What’s your plan for after you hit 100?

Steve: Once I finish the Top 100 I will have feel like I have seen much of what America has to offer. There will still be some courses that I would like to see here in the U.S., but I’m really most interested in seeing the courses where the game was developed over in the U.K. as well as some of the greats down in Australia and New Zealand.

I have never been overseas to play golf so that is definitely the next thing that I’m interested in from a golf standpoint. I’m just hoping that I’ll be in a position that I’m able to continue to travel and play golf like I’ve done for the last six years.

It’s been a lot of fun and I hope I can continue to do it!

Thanks to Steve for taking the time to sit down and share a little bit of his story, if you are interested in really awesome in depth reviews of some amazing courses, be sure to check out his new site, Golf Tripper.

All photos courtesy of GolfTripper.