For those of you not in the Pacific Northwest (Portland to be exact), let me enlighten you on something: it’s been a miserable weather year.

We’ve had more snow and rain this winter than any in recent memory.

I’ve had landslides on the hill by by my house that have closed roads and have almost caused me to miss a flight.

We also even ran out of heating oil (we’re in an old house), upon our return from London over New Years – which wasn’t able to be refilled for over a week due to snow.

It got down to 44 degrees…in our house.

Sorry, just needed to vent for a second to set the stage.

So amidst all of this, it was clear it was time to get out for a few days, and more importantly, go some place where golf was a more feasible option.

LA in January, how could that be a bad idea?

We lined up rounds at some of our dream golf courses (Riviera Country Club, Wilshire Country Club, Valley Club of Montecito, and Los Angeles Country Club), and proceeded to book an AirBnB in Santa Monica.

All was looking right in the world.

Until, we found out about the torrential rain the area has been seeing.

Global warming strikes again – this time in the destination that was supposed to be my savior from weeks of horrible weather.

This sounds like a lot of bitching, and maybe it is, but I have absolutely no doubt none of you will feel sorry for me by the end of this post – and I’m ok with that 🙂 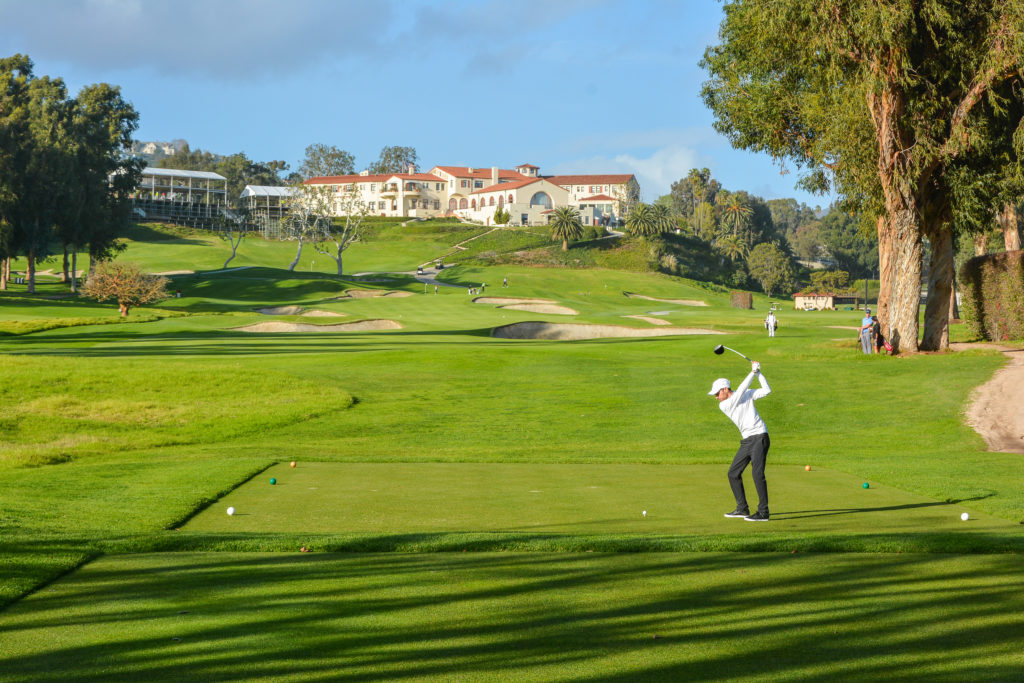 Tal ripping one on 9

On this trip with me were golf photographer extraordinaire Patrick Koenig, as well as Mr. Hole-in-One, Ben Garrett.

When we landed at LAX on Thursday morning we honestly, weren’t sure if we’d be playing golf.

It had been pouring down rain the day before, and it was supposed to be pouring again on Friday.

Our round at Riviera was originally supposed to be on Friday, but in order to escape weather we’d been trying to change it. But due to the fact there were five of us (long story), we were unsure if we’d be able to make it happen.

Fortunately my friend Tal, and our host Mayumi, are two of the most generous and flexible people in the world, so at 1:30 on Thursday afternoon we headed out as a fivesome – can’t say I expected that.

When you show up at Riviera, you truly feel important for the afternoon. Whether it’s the unbelievably expensive homes surrounding the property, or the beautiful clubhouse itself – you know you’re in for a treat.

Riv was one of those courses that has always been ranked highly, but I didn’t fully understand why.

More than most of the other courses I’ve played in my life, it’s one that really needs to be experienced to properly see why it’s so special, and such a well designed course.

It’s not going to awe you with giant elevation changes (save for the first tee shot), or shock you with crazy green undulations. The opening tee shot at Riviera

What I did find, was that out of all the difficult, truly championship golf courses I’ve played (think Medinah, Olympic, Oakland Hills etc) this was by far my favorite.

It was the first George C. Thomas design I’ve played, and I love his design philosophy of starting with a benign par 5 to get you going.

Right after the starter announced my name, and proceeded to tell us “in the spirit of the game, no mulligans are given on the first tee” I topped one that barely made it 100 yards.

But then was still able to save bogey.

The bunkering on the course is world class. From the wrap around green side bunker at 3, to the bunker in the middle of the green at 6, to the all-world short par 4, 10th – it’s all there for a reason, and it makes you think about every shot. The world famous 6th. Look closely as there is a bunker in the middle of the green. 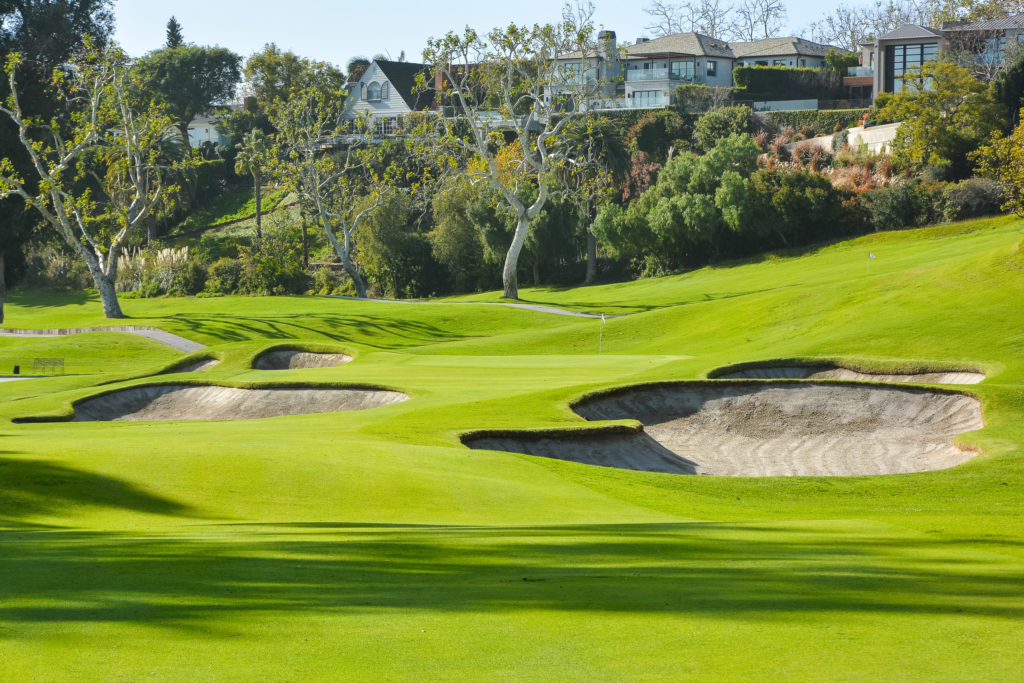 The bunkers on 2 force you to be precise with your approach.

The kikuyu grass that covers the property took some getting used to, as it grabs your club in the rough and makes hitting balls out extremely difficult.

The setting of the course deep in a canyon, with the clubhouse perched atop a hill watching over you, is one of the best settings for golf I’ve experienced – and I can’t wait to relive it when the pros play the Genesis Open this week. The 7th was one of my favorite holes on the course. The par 3 16th at sunset. We just barely got our round in. The magic of camera lenses. It definitely wasn’t this light out… The crew, minus our host Mayumi – next time we want a photo with you!

On day two we were supposed to play Wilshire Country Club, which d 18 holes of THIS. Photo courtesy of @pjkoenig.

espite not knowing a ton about it, aside from that Kyle Phillips did a great renovation, it was one we were excited for.

Despite a torrential downpour, and the fact no one at the proshop was answering their phone, we decided to make the 40 minute drive to the course to see if they’d let a few crazy north-westerners out on the course anyway.

Ben and Patrick, being much more diehard than me, found the only course that was open in the city (Griffith Park) and played what might have been the wettest 18 holes I’ve ever seen.

I was the prudent one and got work done in the clubhouse.

After 3-4 inches of rain fell on Friday, we made the drive up to Santa Barbara in beautiful weather to go experience a truly special club.

Out of respect for the club and our host, I’m not going to post any photos of the course, and I’m simply going to say it’s the kind of club you’d want to be a member at, and if this were the only place in the world where you could spend the rest of your golfing days, you’d count yourself a lucky person. Looking back at the stout 15th hole at Rustic Canyon.

After what we were told was the wettest day in LA’s history, we weren’t sure how the public Rustic Canyon track was going to hold up.

But we decided to drive an hour an a half north to Moorpark to find out.

An original Hanse design, it was one we’d all heard good things about, but didn’t necessarily know a whole lot about.

And holy crap, what a surprise.

There was a fantastic variety in holes, great scenery, and while the fairways were in pretty rough shape, the greens were well maintained and rolled true.

And considering we paid $32 each for the round, I’d say it is up there with Machrihanish as the best value course I’ve ever played.

The highlight of the day was when we stepped up to the #8 tee box. 8 is a shorter par 3, but with a stiff headwind, was playing about 130.

Ben walks up to the teebox first, and as he is putting his peg in the ground he says, “Watch this, Ace-Cam.”

He hits the ball up into the wind and says it again “ACE-CAM!”

The ball landed about 15 feet beyond the hole on a ridge, and proceeded to trickle all the way back to the hole, and drop in. Mr. Hole in One. Photo by @pjkoenig

The celebration that ensued was unlike anything I’ve experienced on a golf course – despite the fact this was not his first rodeo.

In fact, it wasn’t his second, third, or even fourth.

This was his SEVENTH hole in one.

And his FOURTH in the last 6 months.

The only downside was that because of all the rain, we were literally the only ones out there, so the restaurant was closed.

He wasn’t even able to by a celebratory round of beers.

In & Out had to suffice. After that we headed to the airport were I hopped a red eye to Orlando for the 2017 PGA Show and they took off back north to Seattle.

Despite the weather, the trip was everything we hoped it would be.

While we were bummed about Wilshire, we got to play all of the main courses we’d set out to experience and 2 of the 3 we had perfect weather days.

I’m slowly making progress on my top 100 quest with the numbers now at:

Here’s to the next trip, which will be Atlanta in April!

Also, member of a private club and like to geek out about golf with other likeminded people? Check out The Eighty Club.