Earlier this year I was playing at the Cal Club in San Francisco.

Within a few holes, I began to notice the swing of the guy I was playing with.

It’s tough to describe, but every single shot he hit had that perfect look and sound. It was like the difference between watching an amateur and a pro or plus handicap.

But here’s the thing, just a few months prior, he was a 15 handicap – hardly a pro golfer, yet he had a swing that would have made me assume he was scratch. Obligatory shot of Cal Club. The bunkers here were insane.

When I played with him he had dropped to a 9, and my guess is by now he’s comfortably in the mid-single digits.

I when he told me how quickly his handicap dropped, I obviously had to ask the question: “how?”

“I owe it all to the Compressor.”

He summed it up best in an email to me a few weeks later:

Since starting to use it in February, I’ve added two full clubs of distance, with much better trajectory/striking consistency. Per Trackman, my smash factor is ~1.5 (lag!). My index has gone from 14.8 to 9.6 (trend for next revision) in five months.

My last 18 holes at Cal Club I’ve played in 77 strokes, including 5 birdies in 14 hole stretch. I don’t anticipate I’ll stay at 9.6 for long – due to the Compressor, golf is suddenly really, really fun. My last match I won comically in 6&5 – which brings me to another point – if you play in any sort of money game, these clubs will pay for themselves. Quickly.

For those of you who haven’t played Cal Club it’s an incredible, but beastly course. To shoot a 77 there is no small feat, and to put it in perspective, I had my worst round of the year there pushing close to a 100.

After seeing firsthand how good his swing looked (and sounded), and getting a follow up email encouraging me to check it out, I had no reason not to anymore.

I received my DST Compressor 8 iron about 3 months ago (right before my wedding), so this review is a bit later than I would have liked.

That being said, it has given me ample opportunity to try it out and guage it’s effect on my game.

Before I go into that, let’s look at the details…

What exactly is the DST Compressor?

The version of the club I have is a curved shaft 8 iron. Why the curved shaft? The goal is to groove your muscle memory around proper impact position. Looking down at the DST Compressor 8 iron at rest

As an amateur golfer that has never taken lessons, I’ve never had perfect (or even good) form.

You start your club at rest, and I’ve always strived to essentially make contact with the ball in that same position.

This is wrong. It has me “scooping” the ball, not compressing it on a regular basis, and ultimately grooving a swing that’s inconsistent.

What the DST Compressor does is force you to lag your hands, so that you make contact in the proper position. Along with that, it has you starting your swing in a position that much more closely resembles where you should be making impact with the ball. 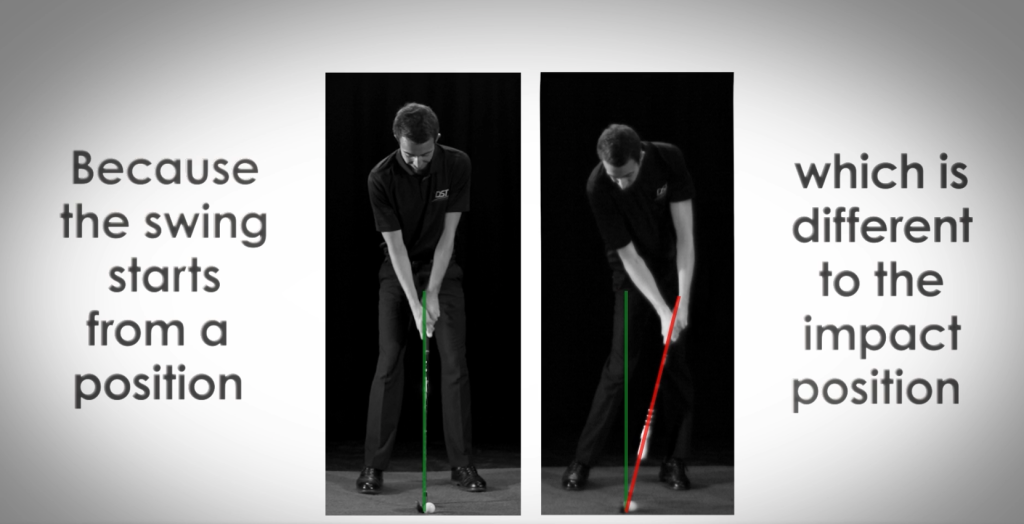 My buddy summed it up really well:

The premise is simple in hindsight – a huge sole with 10* bounce puts the club in a 10* forward press when laid flat on the ground. I’ve noticed ALL pros do this. There’s a white line drawn inside the hosel that, when the sole is flat, points perpendicularly up. With the sole on the ground, you put ball/club dead center between feet. White line up inside hosel points to your nose. You will look like Rory. In fact, I’ve started imagining the white line, shaft lean with my own clubs and have vastly improved my setup issues. Looking into getting line etched/drawn on my clubs.

But the question is, does it actually work like that? Were the raves I’ve heard from others the real deal? Let’s see.

My Experience with the DST Compressor

It really didn’t take a whole lot of convincing to get me to try it out after seeing Chris’ swing and hearing about how he swears it’s all because of this warmup golf club (it’s not legal on the course).

To preface this, from that day I did spend more conscious effort thinking about my hand position and where I made contact with the ball. I’d shift my hands slightly forward in my swing to try and maintain that at impact.

However, once I got the DST Compressor and started really grooving that concept, it’s like a lightbulb went off in my game. Your first few swings with the club, are likely to be ugly if you’re not used to this position. But for me within a dozen balls, it had me more consistently grooving the swing I’d been trying to work on ever since that day at Cal Club.

The results have surprised even me.

After just two weeks of training with the compressor I’d gained at least a club of distance on my irons.

My scores actually went up briefly because I kept flying greens – the distances I’d known for so long were off.

Now on most days I’m finding myself being able to come into greens with shorter clubs, and more importantly I feel more confident that I’ll actually be able to do what I want to do with my shots.

With golf, I’ve told people I’ve never had confidence like I’ve had in other sports. At any given time I could step up with a simple 7 iron, and not have confidence that I’d be able to make clean contact and have the ball do what I want it to do.

Now? The confidence I’ve been searching for in golf for so long is finally starting to come around. It’s not perfect, and I still have a long ways to go – but honestly? My friend was right, the DST Compressor is absolutely game changing and the best training aid I’ve ever used.

Best Way to Use The Clubs?

Now the only DST club I’ve used is the Compressor 8 iron, so I can’t speak to the other clubs.

I’ll then do the same thing again.

At that point I’ve usually got my swing feeling really solid and I can go back and work through the rest of my clubs.

If I find myself struggling, then I pull out the DST Compressor again, hit a few more shots to get a feel for what I’m trying to do.

The more you use it, the stronger the muscle memory gets, and the more effective it will be.

Considering they just debuted in January of 2015 at the PGA show, I’ve been shocked to see just how many pros are using it.

47 of the 78 players in this weeks Turkish Airlines Open incorporate the DST Compressor into their range sessions pic.twitter.com/b6nvUqkStG

So, can you tell how I feel about this club yet?

I can’t wait to spend more time on the range with it during the off season, and really work to make some strides early next year.

You can buy the DST Compressor 8 iron (which is the one I’d recommend getting if you’re only get one), on their website for about $100.