Recently I had the chance to head down to the Dominican Republic for the first time to take part in the 2019 DR Golf Exchange.

I was thrilled when I found out, as to be honest, aside from a quick trip to Cuba years ago, I’d never really even been to the Caribbean before.

Yet, I’ve heard about it.

Numerous people over the years have told me about how the Dominican Republic is the “Capital of Caribbean Golf” and a must visit.

But most of my familiarity with the region all came down to one course:

Built over 40 years ago, and still to this day a fixture on most top 100 lists, it’s the reason most people first think to head down to the DR on a golf trip.

But, alas, playing the historic course wasn’t in the cards for me trip down there.

Which I was bummed about. Golfweek has it in the number one spot for courses in Mexico and the Caribbean (just ahead of the wonderful Diamante and Teeth of the Dog in 2 and 3, respectively.)

But at least among people I’ve talked to, it gets just a sliver of attention compared to the Dye course.

In fact, I really hadn’t heard much about it at all before the trip.

And, that’s a good thing.

So often when I travel to play courses I’ve done tons of research, read reviews, seen photos, and know exactly what to expect.

This time I decided to go in mostly blind, and see what the trip had in store.

And what was in store? A course that absolutely floored me in just about every way.

It was better in every facet than I thought it would be, and is a golf course that should 100% be in the conversation about the best courses in the world.

Let’s dig in and see.

The first inklings of what was in store for me came when I put out on Instagram that I was in the Dominican Republic and would be playing a few rounds of golf.

There were a few about Teeth of the Dog as well, but most of them were about what I thought was it’s lesser known rival

“Are you playing Punta Espada?!”

“Make sure to play Punta Espada!”

Ok, generally it’s a good sign when this happens. 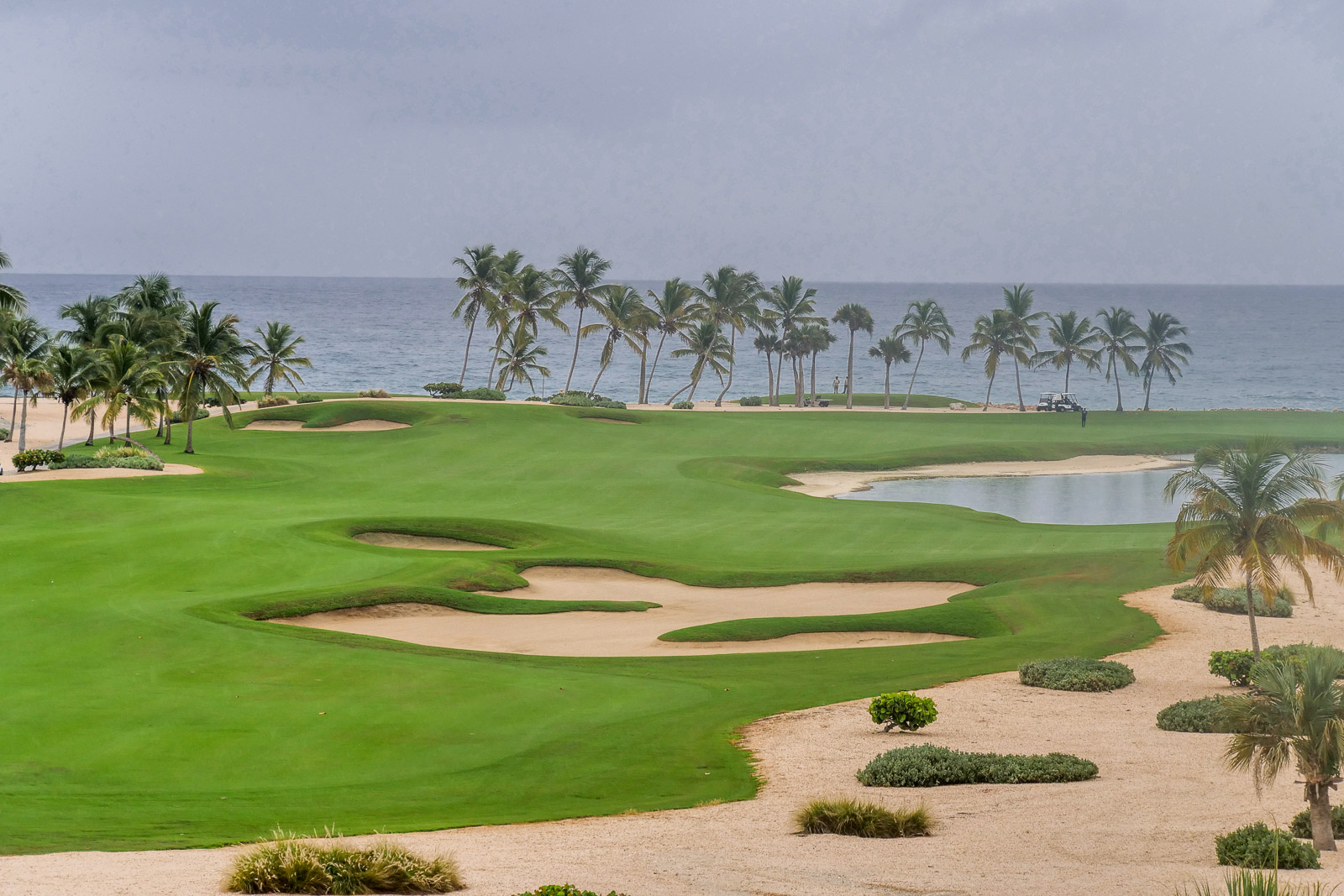 Ok, I see what they mean. The view from upper tee box on #2

Unfortunately after two days of great weather, there was some rain overnight and we had an overcast day on the course.

But we stayed dry, and boy am I glad we did, because from the moment you step on property you know you’re in for something special.

When walking into the clubhouse, the first thing you notice is how through a water feature in the courtyard, there’s a perfectly framed view of the 18th green which sits right up against the ocean. “Ok cool, a lot of courses have an 18th hole that runs parallel to the ocean. I’m sure they used up all the good land for that one hole.”

I couldn’t have been more wrong.

The course was in phenomenal shape, and it was very clear this was a top tier golf course.

The previous day we played Hard Rock Golf Club at Punta Cana, which was a fine resort course and worth playing if you needed an extra round – but it was clear: we’re in a different league now.

Our round at Punta Espada was technically a tournament for the Golf Exchange, but my buddy Evan and I decided we’d rather just enjoy the course, so we took a double bogey on every hole, and proceeded to just soak in the experience.

Or at least that’s what we did after found our starting hole (the 15th) after driving around aimlessly for 15 minutes upon somehow losing the cart we were following (see the Instagram highlights).

Despite starting on 15, however I’m going to try and write about the course in order to better represent what you’re going to experience.

Like many of the best ocean front courses in the world, Punta Espada doesn’t give it all away up front.

The opening hole is perched on the back side of the club house away from the water.

But when you get up to the elevated first tee box, you know you’re in for something special.

Because even though this hole was entirely inland, and any water views were out in the distance, it was both intriguing and unique, yet strategic all at the same time.

Massive rock walls framed the left hand side of the hole, and while there was a lot of room right, you had to decide how aggressive you wanted to be and pick the right line. The opening hole at Punta Espada

The second hole then amplified this in every way.

A massive par 5 measuring over 600 yards from the back tees, it featured similar strategy, similar unique views, but then added an ocean element both in terms of the view from the tee box, and around the green.

From the tips it’d take a big downwind drive to give you a chance to get there in two, but if you’re playing the regular tees, a good drive will leave you in the precarious position of deciding whether to bomb it over the water or layup. A wider view from #2 The approach on #2 at Punta Espada

Three was a beautiful hole playing parallel along the water, with the waves literally crashing right on top of you.

I haven’t seen many golf courses that get you so close to the ocean, let alone an ocean with as much vigor as this one.

And this was just the beginning. I wasn’t prepare for just how many times it would show itself during the round.

4 was a long par 3 heading back up towards the hills for a series of inland holes that were strong in their own right. A favorite being the short par 4, 8th hole that just begs you to rip driver.

A cross bunker from the left asks you to make a decision to layup short, flirt with another bunker right, or bomb it right over the top.

The ocean in the background makes the hole that much more dramatic. The Back Nine at Punta Espada

It’d be easy for Punta Espada to let you down after the front 9, which is phenomenal.

But as you make the turn, it comes out hitting hard with a sweeping dogleg right, with an island green. The 10th hole at Punta Espada with an island green.

The entire hole is right there in front of you, but it doesn’t make it any less intimidating as you try and decide how much you want to bite off on the tee.

Definitely one of my favorite “inland” holes (that still has an ocean view).

Even though the courses are very different in every way but their oceanfront, there were aspects of the course that reminded me of Bandon Dunes.

One of the things Bandon does so well is start you inland, work out to the ocean, go back inland, weave back to the water – on and on throughout the round.

Punta Espada is that on steroids.

12 is a par 5 that has you heading straight back towards the water, with an inlet down the left hand side that had waves crashing over crabs scurrying around on the rocks. And then as you walk off the green, you’re introduced to the par 3, 13th – which in a recent Eighty Club post, I called one of the most dramatic par 3s I’ve ever played.

And that’s exactly what it is. Dramatic.

Yes, with a capital D. I’m not sure if this is the official signature hole, but it certainly looks like it.

250 all carry over the surf from the tips.

A more manageable 175 from the primary tee box, but no matter where you hit it from, there’s one thing for certain: it’s a hell of a lot of fun.

15 is an excellent risk reward par 5 that Evan casually made a tap in birdie on during our opening hole. And then in one of the ultimate finishing stretches I’ve played, Punta Espada heads back towards the ocean with the relatively benign, but beautiful par 3, 16th. It might be my favorite hole on the course – for a variety of reasons. It’s a short par 4, where you have to decide how aggressive you want your line to be. Too far right? Ocean.

Too far left? You’ll run through the fairway.

Just right? Wedge into the green, with ocean views abound. The approach on 17 if you hit the fairway.

But more than just being a great hole is it’s placement in the round.

If you have a match that’s coming down to the wire? Time to get aggressive.

One up? Just get it in the fairway and let your opponent play the hero.

Punta Espada is one of the best match play courses I’ve ever seen, simply due to the sheer number of risk/reward options and choices you have to make off the tee.

Then 18 is a beefy par 4 running parallel to the ocean. When I took off for the Dominican Republic, if I’m being totally honest, I was more bummed that I wasn’t playing Teeth of the Dog, than I was excited to play Punta Espada.

All because I simply didn’t know much about the latter.

In fact, there aren’t all that many courses that I like better – as you’ll see in my upcoming Top 100 update.

I loved everything about the course, and it’d be neck and neck with Muirfield Village as my favorite Jack Nicklaus design.

Punta Espada is one of the rare times where I won’t just say “it’s a must play if you’re in the Dominican Republic.’

No, for me, this is one of those courses that is worth making a trip just to play. The approach shot on #18

Especially considering within an hour drive you still have Teeth of the Dog, Corrales and at least half a dozen other world class courses to experience as well.

Throw an all inclusive resort like Secrets Cap Cana (5 minutes away from Punta Espada), and you’ve got yourself one hell of a golf vacation.

Make the effort to get down there, and when you’re standing on the 17th tee box taking in one of the coolest golf holes you’ll ever play – shoot a thank you video and send it to me 🙂

I was in the Dominican Republic as a sponsored guest of the DR Golf Exchange. That said, all thoughts and opinions in this post are entirely my own.