PuttView Books Review: As Close to a Local Caddie As You’ll Get

I still remember the first time I saw a PuttView green. It was at a Top Golf studio in Atlantic City.

PuttView technology essentially allows you to project anything you want onto an indoor green. For instance, the most common use is it will display your ideal line, with breaks and everything directly on your putting surface.

This particular one was especially impressive, as it was a movable green. It could replicate famous breaks and putts from different greens across the world.

And then if you wanted it to, it would show you the line. Imagine the putting aid from a golf video game – but in real life.

But that’s not what we’re talking about today.

Given what they do, it’s safe to say that PuttView knows a thing or two about mapping greens.

So I got really curious when I found out that they make their own yardage books with green maps.

They’re billed as the most highly detailed yardage books you can buy.

I picked up a couple from my home course Pumpkin Ridge to find out. 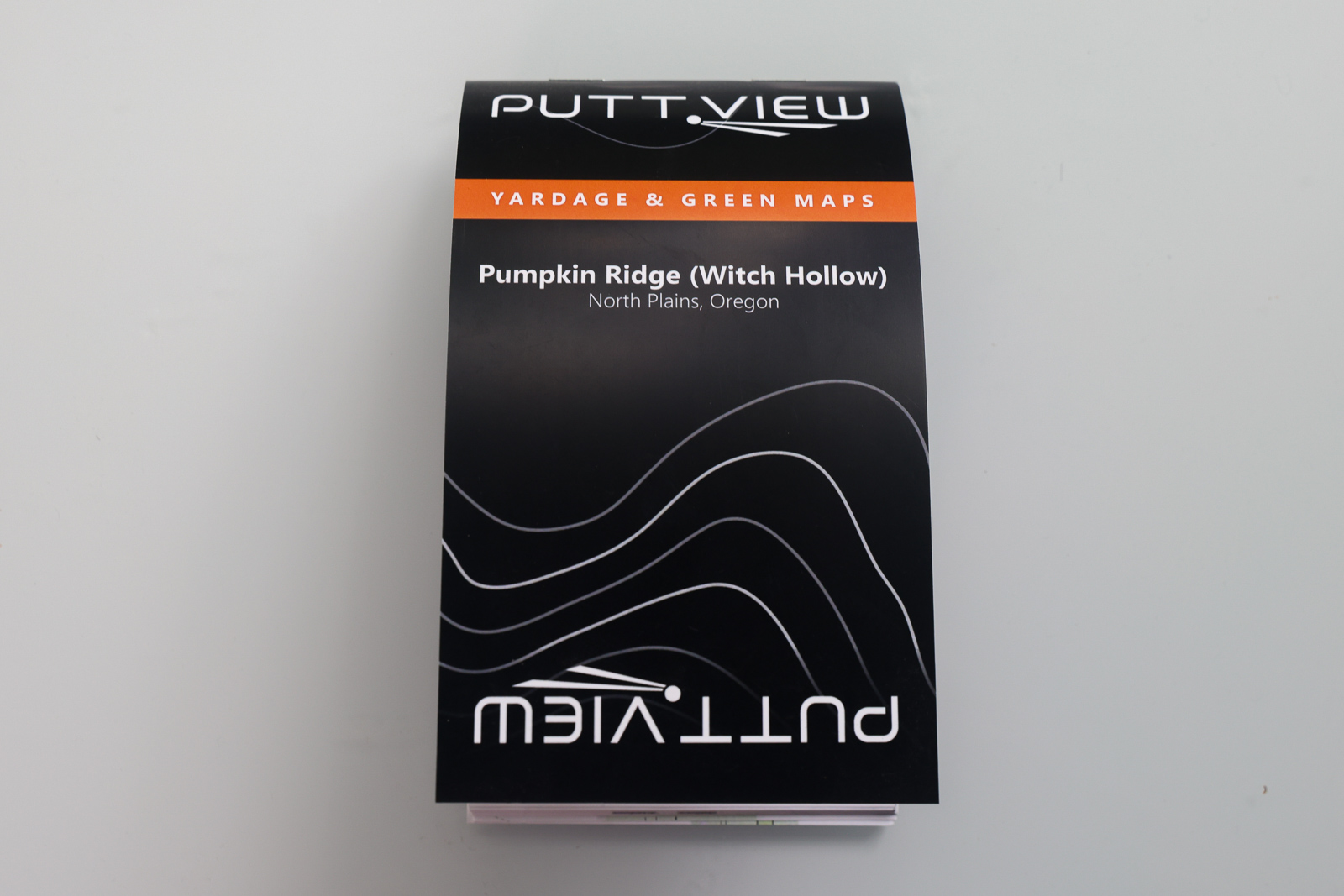 The cover of a Puttview Book

At this point, I really only have two direct forms of comparison for the PuttView books.

You have the traditional yardage books you’d buy at a course or receive at a high-end club, and the more detailed Greenbooks from Golf Logix that I’ve also reviewed.

The latter is certainly the closest to PuttView in terms of a product, so most of my comparisons will be to that.

When the PuttView books arrived the first thing I noticed was that they are a nice size. They easily fit in your back pocket, and are sized to perfectly fit in a traditional yardage book cover.

One of the first differences I noticed is unlike the Golf Logix books, they aren’t laminated.

My first thought was, “Oh, these aren’t as nice.”

But after using them both, I realized not having them laminated actually makes them easier to use on the course and less bulky in my pocket.

The PuttView is printed on waterproof paper, so the laminate isn’t necessary. A quick flip through the pages had me intrigued by the green maps which we’ll talk about in a second, but I noticed the colors don’t appear to be as deep and vibrant as the Golf Logix pages.

Which isn’t necessarily a critique, just more of an observation.

But what really matters is the information, so how does it perform?

How Accurate are the Putt View Green Yardage Books?

They certainly go one step beyond the Golf Logix books in terms of detailed information.

There are a few examples of this.

The first is fairway undulation. The Putt View books will display the break direction on fairways any time there is a greater than a 4% slope.

This is especially helpful if you’re using it for a course you haven’t played before.

For instance on #14 at Witch Hollow, if you’re able to hit a big drive and clear the corner bunker, you can get a little bit of an extra kick downhill towards the green. It’s one more bit of information that may help you choose to take the more aggressive line.

The other area big difference between the Golf Logix Books and PuttView comes on the detailed green map.

Both have a “Detail View” and a “Heatmap” view on the greens.

The Heatmap is similar in both books. It displays breaks and undulations in different colors based on how severe it is.

It works great, and is a very easy way to see at a glance the contours of the green.

So if you’re trying to figure out where to hit your approach, this is a great way to do it.

But in the detail view, things get a bit of an upgrade with the Puttview book.

Rather than just using arrows to show the breaks, the PuttView book actually gives you a percentage of slope number. So if you’re really trying to dial in how much break there is, it’s just one extra piece of information to help you make an informed decision.

Will it automatically help a high handicapper drop 5 strokes off their round?

But it might help the better golfer hole a couple of extra putts or position themselves better with their approaches to give themselves more opportunities.

I also like that it shows you the total depth of the green on the Detail View.

Only One Inaccuracy I’ve Noticed

There’s really only one inaccuracy I noticed after going through the book in detail of my home course.

About two years ago we took out a bunker on the 6th hole and turned it into a collection area.

The green book still has the hole as having a bunker there.

Generally speaking, this isn’t a huge deal. I wouldn’t not buy the book because of this, but rather it brings up an important point.

If one of the courses you’re thinking about purchasing a book for has had recent renovation work over the last few years, it may be worth double-checking to make sure the book has up-to-date data. Final Thoughts on the PuttView Yardage and Green Maps

While they aren’t necessarily dramatically better or different than the similar Golf Logix books, the extra slope information on the greens and fairways is useful, and the lack of lamination is a plus for me as well.

If you’re looking to gain some local knowledge of a course to give yourself an edge over anyone else you’re playing with? Short of walking the course with an experienced member or caddie, I can’t think of a better way to do it than a PuttView yardage book.