GolfLogix Review: Are Their Yardage Books Better than An App?

These days we have no shortage of places to rely on for on course distances and information.

Tools like Arccos Caddie have completely changed how we look at information about a golf course.

Rangefinders are more accurate and feature heavy than ever.

And even basic GPS apps on our phone have made getting precise distances to hazards or greens as easy as clicking a button.

Which begs the question, is there any use for a yardage book or green book anymore? Like a real, paper, analog book…that you keep in your pocket?

Well, there’s a reason that every pro carries one around – and increasingly, I’m finding many of my playing partners are as well. 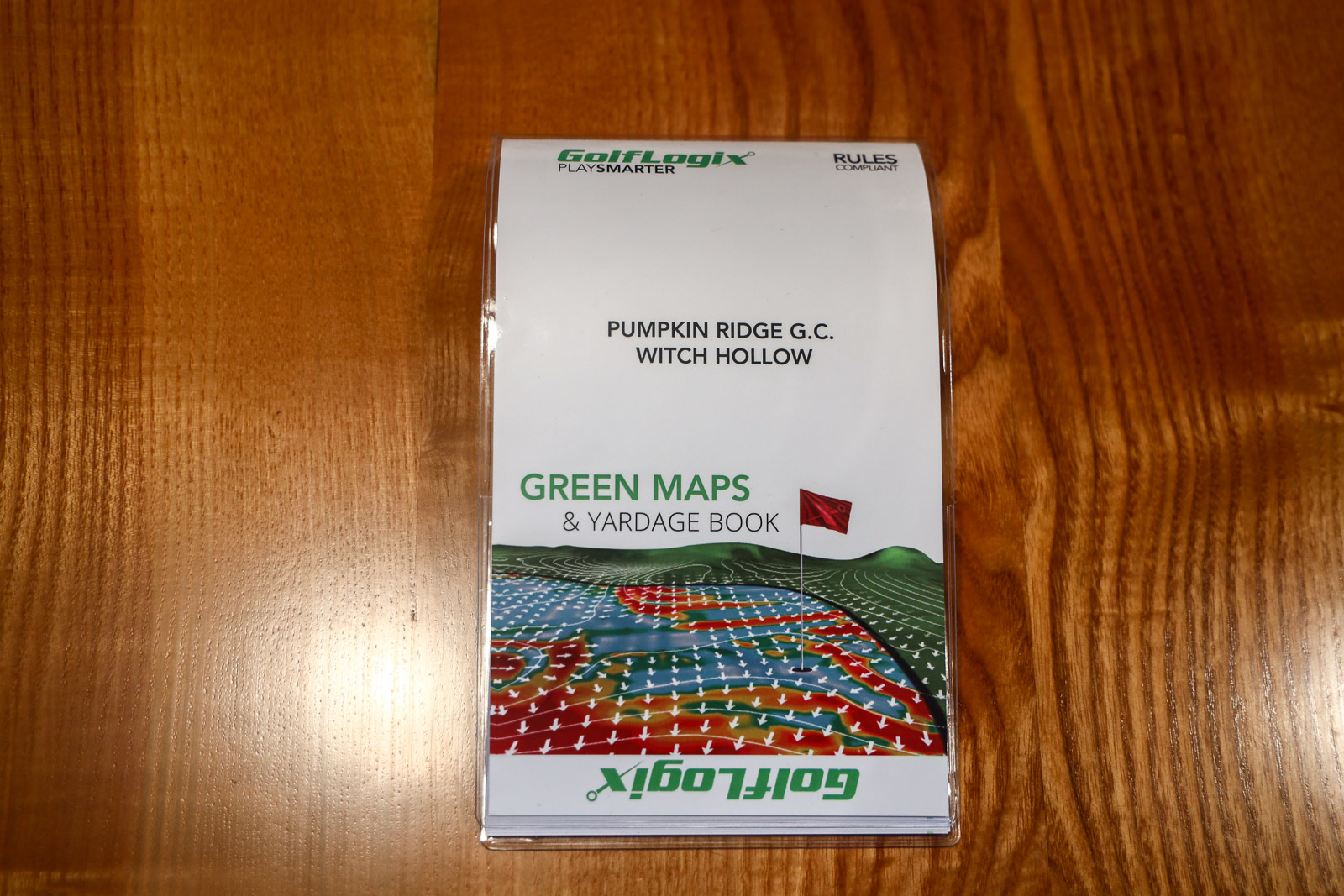 I found it interesting that a company built around apps and tech devices has released such a throw back to a previous era of golf where rangefinders and smart phones didn’t exist.

But after playing a few rounds with this book? I’m convinced there’s absolutely a spot for it in the modern golf toolkit.

When I first received my yardage book for the Witch Hollow course at Pumpkin Ridge, it pretty much looked exactly as I expected.

I wouldn’t say it’s going to win any design awards, but the book is laminated which gives you some confidence in its durability after playing round after round with it.

But what really matters if the information it provides, and that’s where GolfLogix really delivers with their books.

For each hole there are three diagrams:

Assuming you’re not playing in a tournament, in all honesty a rangefinder or other GPS device will give you more accurate numbers in terms of distance throughout the holes on a course. But the reason for actually carrying a book like this around is for the greens, and that’s where this book can give you a solid competitive advantage.

Between the two diagrams the GolfLogix book gives you an incredible amount of detail both in the direction of the break, and the slope of the break to help you figure out exactly where you need to line up your putt. 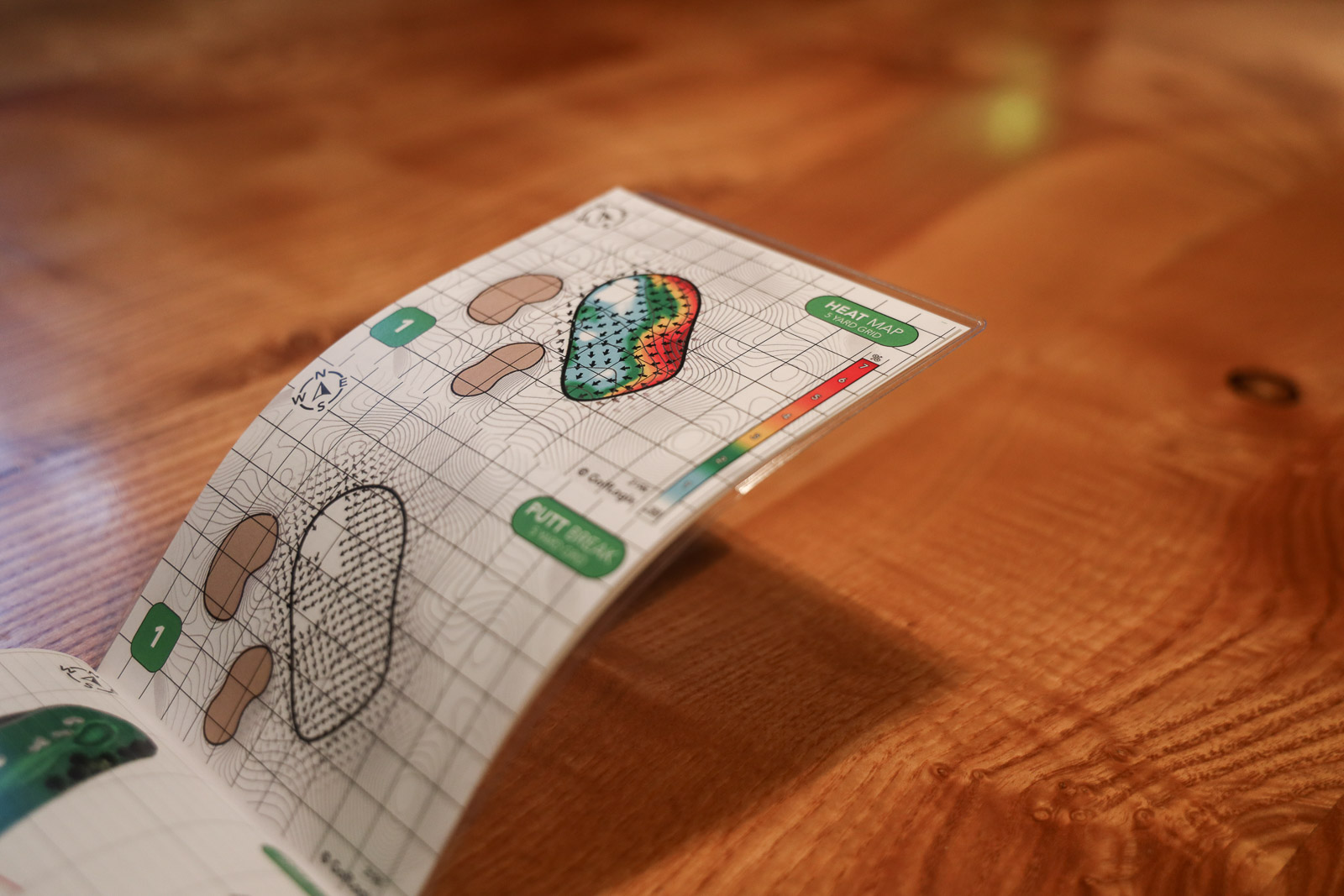 Each hole has two green maps that help with slope and speed.

I know Witch Hollow pretty well, and the book does a very good job of accurately representing the greens, and I’ve found it to come in handy in multiple situations where I was trying to read a putt.

There are a lot of putts on the course that look benign, but in reality are much faster than they look. These are very accurately recorded on the green book, and with one glance at the book, you could find yourself altering your strategy. The green speed heat map of the first hole at Witch Hollow.

My only complaint comes down to only the absolute most subtle of breaks.

It’s well known amongst Pumpkin Ridge members that there are a few subtle breaks that are very counter-intuitive.

Generally speaking on the front 9 of Witch Hollow, if you’re questioning the break, it’s going to break towards the clubhouse.

Often these putts look flat, or often look like they break the other way.

For instance there’s an area on the 7th hole where if you’re putting back towards the hole it looks like it’s going to go left, but time after time, it breaks to the right. The putt break map for the first hole at Witch Hollow

The very first thing I looked at in this book was that putt. Which is oh so very slight, but is one I’ve seen many a golfer fooled by.

In this book it has it as a flat putt. Which it basically is. The slope is imperceptible, but I’ve seen it over and over again that it’s there.

To be clear, this is the exception rather than the rule. There are similar situations on other holes, like the first listed above. And it has the break and has it as a 1 for speed, which nails it.

In the vast majority of cases the book is dead on.

Should You Buy a Golf Logix Yardage Book?

These GolfLogix Green Books aren’t exactly cheap. They range from $30-50 based on the course you’re looking for – and my Witch Hollow one runs $40.

At that price, it’s not like you’ll be running out and buying one for every course you play.

But if you have a home course that you play on a regular basis – I think it’s a worthy investment.

Spend a couple rounds really looking at every hole, or maybe go out and walk the course with the book in hand. Hit some putts, roll some balls, and you’ll get a very clear sense of green intricacies that would take many rounds to learn without the book.

After two rounds with one of these, I’ve learned things about my own course and the greens that I hadn’t noticed before, and I know that if I keep this in my pocket there will probably be at least a stroke or two saved per round from the information it provides.

Is that worth the 40 bucks? I’d say it’s a good investment.

This also makes a great golf gift if there’s someone in your life who you think would benefit, but wouldn’t buy it for themselves. And they have a reseller program if you work at a course and are interested in adding them to your proshop.

Check out the GolfLogix Green book for your home course on their website.