Being from the Pacific Northwest, one of the very last places I’d ever think about visiting or taking a vacation would have to be Bermuda.

Honestly, I’ve never known much about the country aside from the fact there’s a line about it in a Beach Boys song, there’s a scary triangle around it where people die, and more recently, that it’s home to one of the best golf courses in the world: the Mid Ocean Club.

But when you start thinking about the fact it even exists in the first place? You begin to realize how unique it is.

Bermuda is a tiny island, 600 miles from any other landmass, and yet in 1921 C.B. Macdonald, one of the greatest course architects of all time created a world class golf course there.

The course features all of the wonderful template holes so many historic courses feature like the Redan, Biarritz, and what might just be the greatest “Cape” hole in the world. When you put all this together, all of a sudden you start to think: “So, Bermuda huh? Definitely need to make a trip out there!”

As luck would have it, not long after discovering this new found fascination with the Mid Ocean Club (and Bermuda in general), we had a couple Mid Ocean Club members join the Eighty Club, and express their interest in hosting an event on the island.

“Sweet! This is my chance!”

Bermuda vs. the World

I was surprised at how relatively easy it was to get to Bermuda from the west coast. My routing had me take a red eye from Portland to Atlanta, and then after a brief layover hopped on a two hour flight to the island nation.

I also didn’t realize just how easy Bermuda is to get to from pretty much anywhere on the east coast – a quick two hour flight makes this a long weekend vacation destination more people should consider.

When you land and get through customs (which never takes that long), it’s only about a 10 minute taxi to the Mid Ocean Club.

Despite only being a semi-tropical island, you immediately feel like you’re a world away from the US as you wind through the streets getting ocean views.

When you pull up to the club, and overlook the 18th fairway out to the water beyond, you realize you’re in for something really special. A look at the 18th green from the Clubhouse

Before I go too much further with this post, there’s one thing I want to address, as I know it will be a complaint some will have:

“This all sounds great, but it’s a private club, so I can’t play it!”

Yes, it is a private club. But unlike most of the exclusive private clubs in the United States, it is still accessible.

Certain times of the week they have visitors tee times that allow non-members to play the course. The rounds aren’t cheap, but the important thing is that you can still play.

I truly think more clubs in the US should operate this way.

Charge as much as you want, but at least give people an opportunity to see it.

Mid Ocean Club: What to Expect Playing the Course

One of the first things I wasn’t prepared for was just how much elevation change there is on this course.

How wrong I was.

First off, Bermuda as an island is anything but flat. It’s rocky, has windy roads everywhere, and is actually a really interesting landscape.

Even the “flat holes” (of which there aren’t many) aren’t generally that flat, with interesting fairway movement. The 14th at Mid Ocean is one of the more “flat” holes, but with bunkers like this, it’s still very interesting.

In my opinion the opening hole at Mid Ocean is one of the very best openers in the world. I hold it up there with the likes of Spyglass Hill, Machrihanish, and the Sheep Ranch as one of my favorites. The approach on the first hole.

The hole plays up a ridge the juts straight out towards the ocean with a green perched atop a hill.

There are lots of bunkers, and more often than not, a lot of wind – as it’s one of the most exposed parts of the course.

It sets the scene for a round you’ll remember for a long time.

Despite the Clubhouse overlooking beautiful ocean views, there isn’t as much ocean front golf as you’d expect.

The up and down par 5 2nd takes you to the “Eden” template 3rd hole which borders water before the 4th hole takes you right back uphill and inland again. The uphill approach on the par 5, 2nd hole. A top down view of the 3rd hole. Looking at the uphill 4th hole.

You won’t have a true ocean front hole until the 17th and 18th.

But trust me, that doesn’t matter – as there are so many interesting holes between those two points that you’ll just be excited to be playing.

If you’re not used to playing out of Bermuda grass, it will take a bit of getting used to. Usually I get used to it right at the end of my trip – I’ve never scored particularly well at Mid Ocean 🙂

The Best Cape Hole in the World?

C.B. Macdonald had a few dozen different “template” holes, but one of my all time favorites is the “Cape” Hole.

Essentially you have a fairway that is set to a 45 degree angle to the teebox, usually with water or trouble involved.

You then get to decide how much you want to bite off on your tee shot, making for a wonderful risk/reward type of hole.

The 5th hole at Mid Ocean is one of the most famous Cape holes in the world, and is a beast of a golf hole. The Cape at Mid Ocean.

The 4th hole goes straight up hill, and the one thing that pictures can never do justice is the scale of the the 5th.

The teebox is much higher up than you think it’s going to be, and the green is much more severe as well.

It makes for a fun and exciting hole, and one that benefits from having played it a few times. The green on the Par 4, Cape hole.

There are a lot of memorable moments on this golf course. I’ve mentioned the 1st, 3rd, and 5th. While I honestly don’t think there’s a bad hole on the course, I can still play favorites.

For me, an underrated hole on the course is #6. It’s a short-ish par 4 with a blind tee shot due to ridge running across the fairway. Standing at the top of the ridge on 6 looking down towards the green.

If you bomb it, you’re likely going to have a tricky sub-100 yard pitch shot to a green that has trouble long. So it forces you to think about what club to hit off the tee to give you the best distance in.

A hole that looks easy on paper, but I’ve seen plenty of big numbers in my time here.

I’m also a sucker for a good biarritz hole, and I like the one at Mid Ocean. It doesn’t get as much recognition as the examples at other courses, like say Yale, for instance, but it’s such a dramatic look, that it’s always fun to play. Finally, I love the 18th. It’s perched atop a cliff with the clubhouse on the left and a drop down to the ocean on the right. 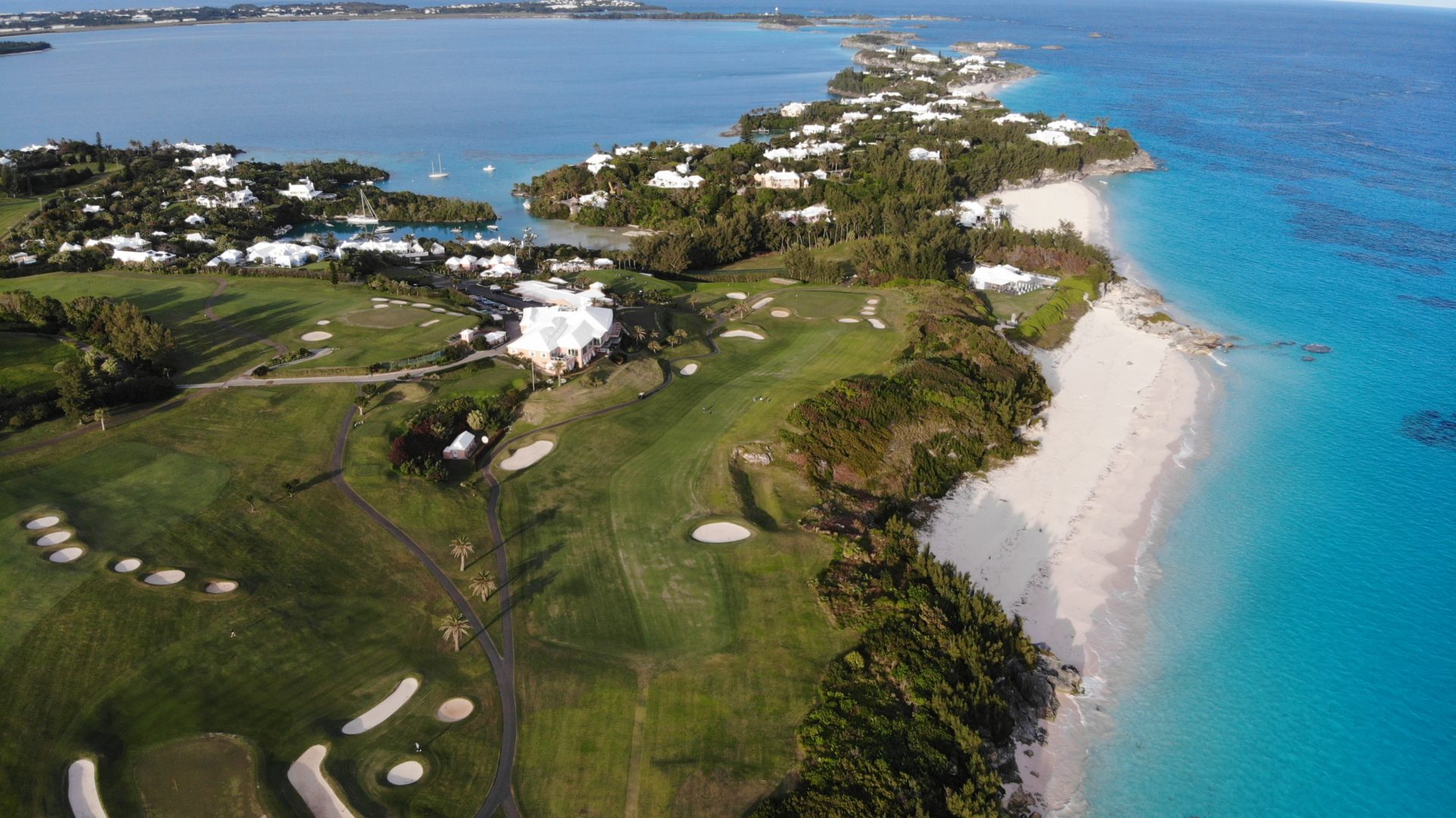 It’s distracting both due to the views, and the members that may be watching your train-wreck as you limp in after being up 5 holes in your match (not that I’d know anything about that). But it demands the type of focus that a good 18th hole should have.

I also love the wild green complex of #8: Looking at the 8th green at Mid Ocean Club.

If you’re reading this in preparation for a trip to Bermuda and the Mid Ocean Club – I’m excited for you, you have a lot to look forward to!

If you’re debating whether it’s worth the trip or the expense to play? I’d say do it.

It’s truly unlike any course I’ve ever played. Not only is it crazy to be playing at a private club out in the middle of the Atlantic, but to have it be a Macdonald design with so many of the templates wonderfully in tact – it’s a must play for any lover of or historian of the game.

And if you get a chance, try and stay on property in one of their villas. The rooms are great, and you certainly can’t beat the convenience 🙂

If you want a little bit of video from the trip, I shot this video for my other blog while I was on the island: