The first time I stayed at the Four Seasons Atlanta, I really didn’t want to be there.

It was 2016. I was in Georgia to attend The Masters, and we were set to fly out the day after we attended the tournament.

Unfortunately, some unprecedented stormy weather hit the region, which forced Delta to cancel nearly all of their Atlanta flights for 24 hours.

Considering Atlanta is Delta’s hub, you can imagine the chaos that ensued.

To make a long story short, it took hours in lines later, and nearly 3 days before we could finally get a flight out.

And when we did? It wasn’t even back to my home of Portland. It was to Seattle, and I had to find my own way back home from there.

Ok, where am I going with this, and what does it have to do with the Four Seasons Atlanta?

The first night we were there, at about 10pm my friend Dan gave up. “I’m not waiting in that quarter-mile-long line.” (Literally, it was at least that long)

“I’m gonna go find a hotel. Let me know if you give up too and you can crash with me.”

It was just after midnight we called it quits.

“Where are you staying?”

“Four Seasons. Come on over. I’ll get a rollaway.”

At least my friends have good taste.

That next day we enjoyed the pool. We had an epic brunch.

And then we went back to the airport to try again to find a flight.

Hint: We didn’t. It wouldn’t be until the day after that, when we’d actually get to leave Atlanta.

I wouldn’t visit Georgia for another 5 years.

But on a trip to Reynolds Lake Oconee, I made it a point to try and hit all the best hotels in the area. It started with a wonderful stay at the Ritz Carlton Lake Oconee, and ended with a couple nights at the St. Regis Atlanta.

But in between, I went back to the Four Seasons: and it was every bit as good as I remembered it.

It was a busy trip, so unfortunately my time at the Four Seasons Atlanta was a brief one. I didn’t arrive until 9pm, and had to be out the door by 7am the next morning.

But I was determined to make the most of my time there.

And you know what?

When you walk into the Four Seasons you’re treated to a very grand entrance. When I think of a five-star hotel in a major metro area, this is the kind of lobby you expect to see. There’s a grand staircase right through the front doors, which leads up to the hotel’s restaurants.

The entire lobby is covered in wood and marble, and it feels very luxurious if not a little dated in its style.

It was built in the early 90s and originally opened as the GLG Grand Hotel. But the lower 19 floors have been the Four Seasons since 1997.

I showed up on a Thursday night and the place was very active. You could hear chatter and laughter coming from Bar Margot a floor above, and everyone that seemed to enter the front door was dressed to the nines. Looking over at reception.

It wasn’t quite the same level as the crowd at the St. Regis over the weekend, but you could tell this was still a place to be seen.

The check-in experience was wonderful, and the level of service was everything you’d expect from a Four Seasons property.

I was disappointed to see that the pool had closed at 9, as that was one of the places that I was hoping to visit for this review. And to be honest, after a long day of golf, the hot tub sounded pretty damn good.

The receptionist was extremely helpful in this matter, and said that she’d be able to give me access until 11, she’d just have to let me in personally, as the door was locked.

More on that later.

The Rooms at the Four Seasons Atlanta

I stayed in a Premier City View King room, and it had a very different feel than the lobby might have suggested.

While the lobby’s rose marble tones clearly harkened back to a few decades prior, my room was decidedly 2022.

The room was a very nice size for a metropolitan hotel. Upon entering the bathroom is on the left and there’s a little bit of a hallway that leads into the main room. The view when you first walk in the room.

There’s a wall of built-in shelving and drawers on the right that housed the very large flat-screen TV, and had nice accent lighting that added to the experience of the room. There was both a chaise lounge area as well as a table with two leather chairs for doing work. They fit well with the room, and under normal circumstances, I would have likely spent at least an hour or two working in either, or both of those spots. The multiple seating options are a nice touch.

But with an early tee time the next day, and a lot of hotel to see, they didn’t get any use on this trip.

The king-size bed, as you’d expect from a Four Seasons was excellent.

The Ritz-Carlton beds were by far the plushest and softest of the trip. But after more than a couple nights, you start to realize that overly soft isn’t always a good thing.

The Four Seasons beds were a perfect balance of luxury and sleepability (is that a word?) On a recent stay at the Four Seasons Punta Mita I described the bed to my wife like this:

“Every time I roll or turn, it’s like the bed automatically puts me in the exact, most comfortable position I was looking for.”

The beds at the Four Seasons Atlanta feel the exact same way.

The bathroom was fantastic with a large, and luxurious-feeling shower. The backlight on the mirror also has a way of just making you look good, regardless of what state you actually look like.

Overall the room was fantastic. 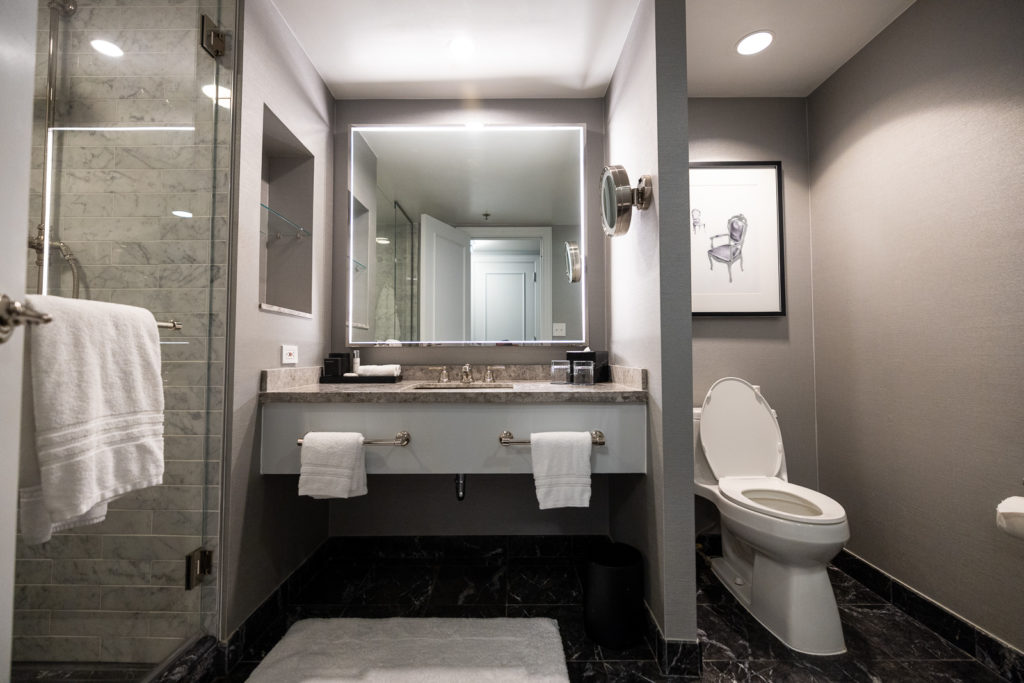 The room also had nice additions like a Bose Bluetooth speaker, and Nescafe coffee maker with pods – which remains one of my favorite parts about staying in luxury hotels.

There wasn’t anything over the top memorable, and it honestly wasn’t quite as luxurious as the St. Regis Atlanta, but it’s a very nice five-star hotel room (that you’ll likely snag for a few hundred bucks cheaper than the St. Regis…)

The Pool and Gym at the Four Seasons Atlanta

One of the biggest bright spots of our disastrous Delta experience years back, was being able to spend some time at the Four Seasons pool in the midst of it all.

And honestly? I had a similar experience this go around.

As I mentioned, after 9pm they had to let me in personally, but the fact they would do that is a step beyond most hotels I’ve been to.

So after a long day of golf, a very rainy hourlong drive from a northern suburb, and a quick pitstop to my hotel room, I grabbed my suit and came back down to the indoor pool.

At this point, it had been a very busy week.

So to be able to take half an hour and casually swim back and forth in the pool that I had all to myself, soak in the hot tub, and grab a quick sauna? It’s great that the hot tub has a device for handicap access, but I will say given the limited size of the tub, the giant green tent did intrude a bit on the experience.

The pool is huge for a hotel in the middle of the city, and was a great place to spend some time. Not quite Park Hyatt Tokyo or Park Hyatt NYC level, but well-above average for a hotel pool.

The gym is also very large for a city hotel, and I doubt you’ll have any problems getting whatever workout you’d like in while you’re there.

My guess is most guests here will never step foot in the pool area, but if this is important to you when you stay at a hotel? I doubt you’ll be disappointed.

Bar Margot at the Four Seasons

While I was at Lake Oconee, one of the people I was on the trip with mentioned I needed to visit Bar Margot while I was in Atlanta if I was into cocktails.

Well, considering I was staying just a few floors above it, it seemed silly not to go.

After showering and taking some photos of the room, I headed down for a nightcap at Bar Margot – which was packed.

It was an interesting crowd of dressed-up locals, and hotel guests that were clearly on business trips.

I asked one of my common questions of: “If I’m only here once, and I can only order one drink, what do I have to get?”

“I’d get the smoked old-fashioned.”

If you know me, you know those are the magic words.

Sidenote: You can make these at home using a cocktail smoker. A few minutes later the bartender came out with a carafe filled with my old-fashioned and a whole lot of smoke.

He put in the glass and proceeded to pour the drink over, causing everyone close by to look over in interest as if to say “oooh, what’s that?”

The cocktail was good, but certainly not the best I’ve had.

Frankly, the boulevardier at the St. Regis (which didn’t have any accompanying theatrics) was a more memorable drink.

But I’m glad I made the effort to stop by.

If you’re a frequent Four Seasons visitor, it’s unlikely that it will go down as your all-time favorite Four Seasons Hotel. The Four Seasons Punta Mita wins in that category for me.

But if I were visiting Atlanta again, I would absolutely stay here again and be excited about doing so.

So if you’re in the area and you want a convenient hotel, with great amenities, nice rooms, and excellent service? The Four Seasons Atlanta is still one of the very best options in the city.