Our recent trip to Singapore, basically sums up this entire blog in a nutshell.

This is kind of how it went…

“Agreed, we can get some pretty cheap flights in 3 weeks, that will help me retain my Delta status.”

“We can use some miles to stay at some nice hotels, and it’s only an extra hundred bucks to do a stopover in Tokyo for 2 days.”

So, that’s what happened.

We took a relatively last-minute trip to Singapore solely to visit some of the best bars in the world and play the Serapong Course at Sentosa.

You can find a recap of the best bars in Singapore here but the point of this post is to talk about our first hotel, the St. Regis Singapore. Note: Yes, we stayed at two, because why go all that way and not experience as much as you can!

Now, when I take trips like this, seeing the different hotels is honestly half the fun for me.

I know, I’m weird. But as someone who almost pursued a career in resort management, I’ve always been drawn to them.

After consulting a handful of friends who are more well-traveled than me, the general consensus is that there are a number of good hotels in Singapore, but not many that are great.

Fortunately, during the time we were going most of the hotels were downright affordable – which shocked me considering Singapore’s reputation of being such an expensive place to visit.

After spending longer than I’d like to admit going back and forth between a handful of options, I decided on the St. Regis. About a year prior we had our first St. Regis experience in Shanghai and were blown away.

And the good news is, that we weren’t disappointed by the St. Regis Singapore either.

As with many of the flights getting into Singapore, our flight from Tokyo got in right around midnight. To make things easier, we stayed at the Crown Plaza at the airport, which has to be one of the nicest airport hotels in the world. It’s the second time I’ve stayed there, and everything from the rooms, to pool, to workout facilities were excellent.

Here’s a video I shot at the St. Regis Singapore that also gives some insight into how I’m able to be slightly pretentious, on the cheap 🙂

Arriving at the St. Regis Singapore

The next morning we hopped in a cab and were whisked away to the St. Regis in a drive that took all of 15 minutes. One thing I love about Singapore is just how easy it is to get around.

The hotel is located on Orchard Road, which is one of the primary destinations in the City.

It’s where much of the shopping is located, and was fine, but we preferred the Chinatown area which had much more character (and hawker stalls for excellent street food).

But it worked well, as this was a Sunday and only two of the bars on our quest were open on Sunday nights (The Other Room and Manhattan), which fortunately for us were the only two that were within walking distance of the St. Regis…but I digress.

When walking in, it’s clear you’re in an opulent hotel – the enormous chandelier in the entryway tells you that much.

While it wasn’t quite as grand or fresh looking as it’s Shanghai counterpart, it frankly, exceeded my expectations after hearing that it was one of the older St. Regis properties.

And from there, everything just got better.

The Room and Service at the St. Regis Singapore

The service at the hotel was absolutely second to none. We were escorted to our room, which was the base Executive Deluxe Guest Room and was still 560 sq feet.

Honestly, to have your most basic room be both this large, and opulent, is extremely impressive.

To give you an idea of the service in the hotel, the rooms themselves don’t have coffee makers.

Rather, you call the concierge, tell them what you want, and they bring you freshly made coffee. I’d never seen this at a hotel before, and aside from one afternoon where it took close to 20 minutes for them to deliver it, the service was both fast, and enjoyable.

Not to mention the delicious cookies that came along with it 🙂

I believe this was the first hotel room I’ve been in that featured a full Bose surround system, and the controls on each nightstand for various room functions were super over the top.

The automatic shades were perfect for those hungover mornings after our bar visits, and the bathroom alone was larger than many hotel rooms I’ve stayed in. Our bed, and fancy room controls on the nightstands. And the shower was a nice private oasis.

This was hands down one of the best basic hotel rooms I’ve ever stayed in, and considering the fact it was less than $250/night while we were there? I’ll take it. 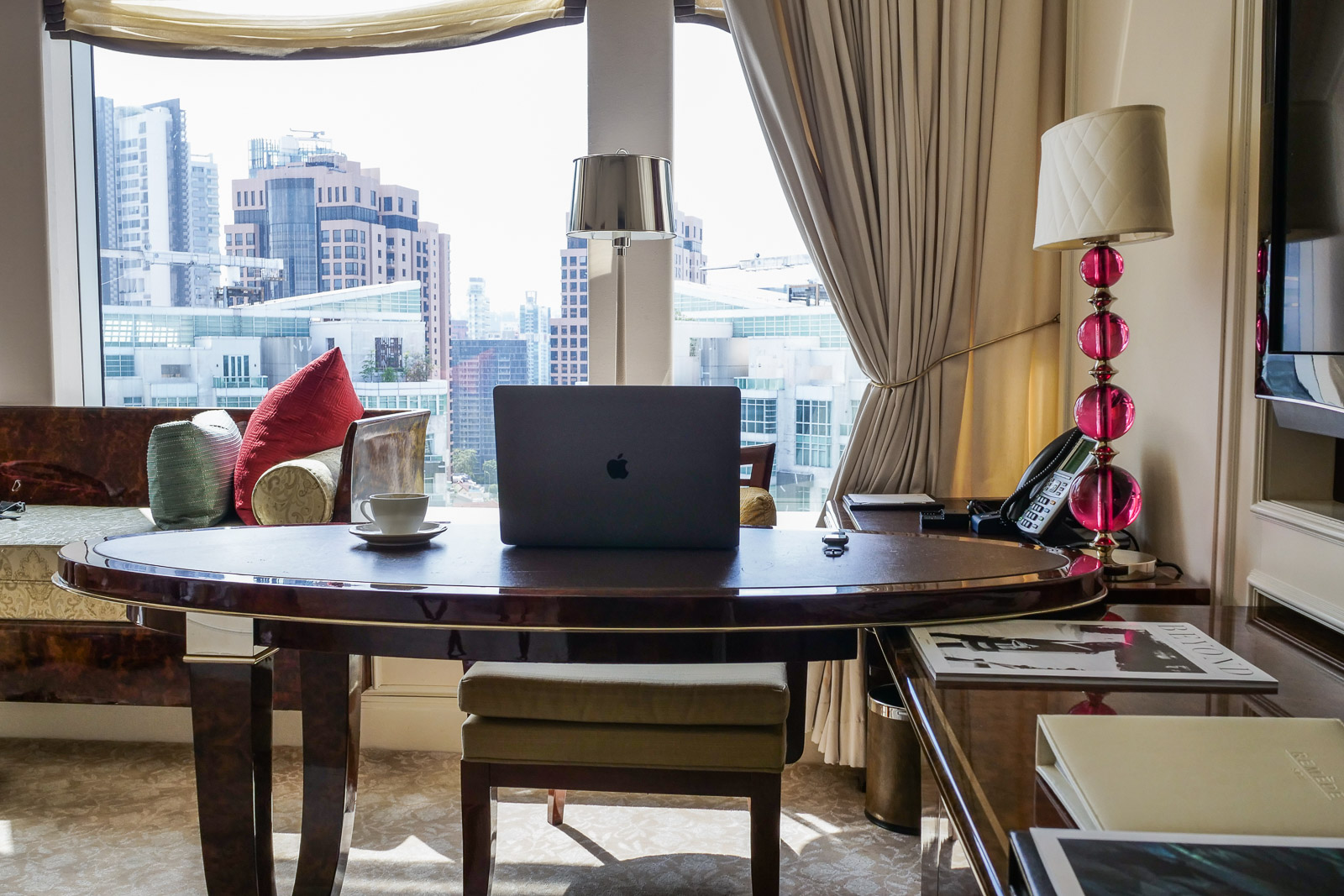 An office with a view.

As if I couldn’t get any more pretentious, whenever I can I try and stay at hotels that have day spas with complimentary access for their guests.

It was an added bonus that the St. Regis Spa was recognized to be one of, if not the, best in Singapore.

I expected to head in there once, have the experience and then move on and to, you know, more cultured things while in the country.

But due to a combination of late nights, torrential rain, and jet lag – the spa became a daily indulgence – and man, what a spa it was.

The centerpiece is a pool in the center of the room with water pouring out of the ceiling. It was kept at the perfect neutral temperature. It wasn’t hot, it wasn’t cold, it just….was. The Spa at the St. Regis Singapore.

You could head outside for an ergonomically shaped hot pool that while only 18 inches deep, was perfectly situated for you to lay down and get comfortable.

The steam “chambers” were excellent and a step above your typical steam room, and the sauna….well, it was a sauna.

Recovering from your strenuous spa time on the heated chairs was also a nice treat.

We also never went in the main pool for the hotel due to rain that popped up every time we wanted to go outside, but it looked nice. The only complaint is the proximity to the main dining area. As people are enjoying their food, they basically look directly out into the pool area – which could put you off if you’re a self-conscious type of person. Resting after doing the full circuit.

Singapore is one of the best destinations in the world for street food. The melting pot of cultures and food that can be found in the hawker stalls for incredibly affordable prices, was too much to pass up – and that’s where we ate most meals on this trip.

We save most of our money for booze.

That said, Singapore is home to some world-class Michelin-starred restaurants.

Our one splurge at the hotel was doing their breakfast buffet – which being a St. Regis breakfast, didn’t disappoint.

On top of the plethora of meats, cheeses, fruits, and juices – they had a menu of specialty items you could order. I opted for the lobster and caviar omelet – which is just as rich as it sounds. Lobster and caviar for breakfast.

Overall the food was good, but not quite on the level of the best breakfast buffets I’ve experienced.

Overall, I’d highly recommend the St. Regis Singapore. While it’s a little older, it’s a beautiful property, with world class service, and is generally a bit less expensive than some of its other international counterparts like the Ritz Carlton.

It isn’t the most convenient if you’re looking to hit China town or Marina Bay, but if shopping is your goal, you’re in the perfect spot. And let’s not forget, things in Singapore are close, so unless you’re on Sentosa, you really can’t go to far wrong.

And if you’re visiting on a golf trip? The Serapong Course at Sentosa lived up to my expectations, and is among my personal top 100 favorite courses.