I review quite a few products here at Breaking Eighty – and most of the time in the end the products that make it on the site are really good.

While I’m not sure I’d call the Bushnell Pro X2 rangefinder revolutionary, I can unequivocally say it is one of the very best golf products I’ve ever reviewed on this site.

If you’re interested in this, also check out my review of the newer Bushnell Pro XE rangefinder.

First Impressions of the Bushnell X2

I’ve probably reviewed more rangefinders than any other type of product on the site. I’ve got a pretty good sense of what I like, and where most products fail.

Originally I gave the Bushnell V4 a really solid review, but after having played with it for most of my rounds for about a year, I’ve gotta say it’s actually been a little disappointing.

While it feels high quality and has a great lens and viewfinder, I just found that it wasn’t all that great at consistently picking up the pin. The jolt was intermittent, and occasionally I’d get stuck in meters or slope would get turned off and I’d struggle to remember how to get it back.

And at a $400 price point, it better be damn good, because upstarts like Precision Pro are doing a great job at less than half the price.

So, when I received my new Bushnell Pro X2 I was curious as to whether they’d improve on the things that the V4 struggled with, or if it would be another let down from the company that is supposed to make some of the best range finders on the market.

Upon taking it out of the box, I was immediately taken with everything about the build quality and feel of the X2.

Don’t get me wrong, the V4 was very high quality, but the X2 is a notch above. It is a little bit heavier than the V4, but for me, I found this to be the case in a good way. It feels sturdy and expensive (and it is). I liked the darker metal look over the white plastic of the previous generation. Out of the box, it comes with all of the standard things you’d expect, namely a Bushnell case with super and elastic band for easy access and microfiber cloth for cleaning the lens.

But all of this means nothing if it doesn’t perform, so does it?

Note: I apologize for the lack of photos on this one. I just started a 2 month trip around the world, and forgot to take photos before shipping my clubs back home. I’ll update when I return!

When it arrived, as I usually do I walked out to my back deck and started shooting random trees and houses. Often I’ve found since I’m not trying to shoot a pin, some of these for other range finders were difficult to get to work.

With the Bushnell though, with every single thing I shot, it was an immediate and accurate response.

When I got it out to the course, I was blown away. Extremely fast and accurate, and no matter what pin I shot at, it registered nearly immediately.

Being on the upper end of rangefinders, it has added distance that you’ll never need (pins up to 450 yards), but it’s a nice feature to have.

The only issues I ever had were at a recent foggy day at Fishers Island, where simply due to the fog it wasn’t able to pick up some pins at times – but that’s not a fault of the product. 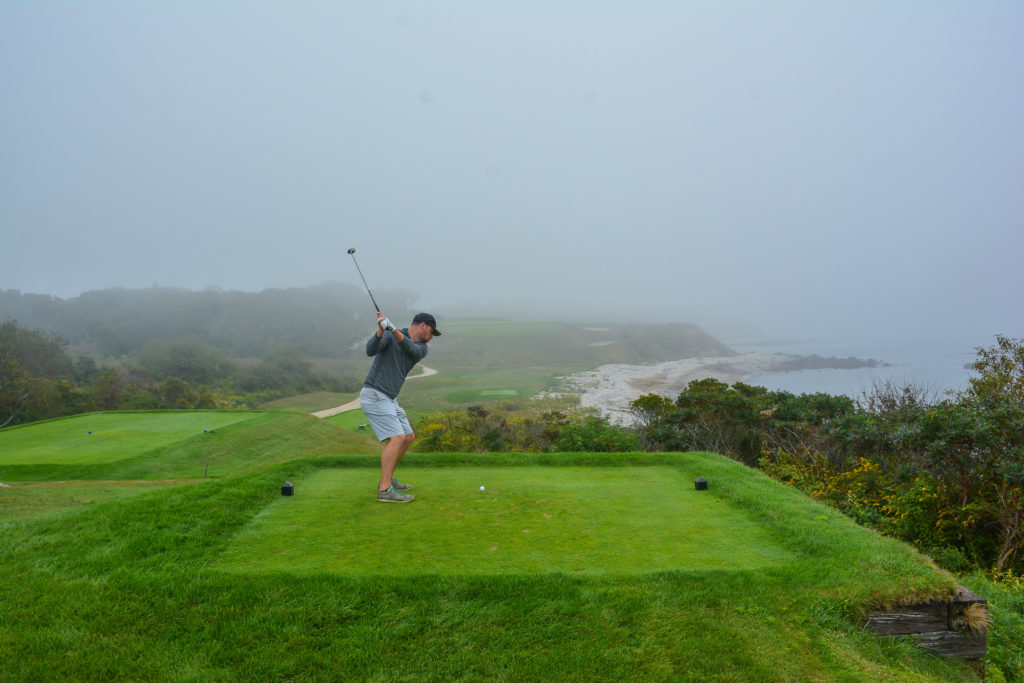 Believe it or not, this was one of the less foggy periods of time.

There really isn’t much more to say about performance, it performs flawlessly and is a joy to use.

So you know I like the look and feel and it performs, but we haven’t even talked about two of the best features of X2 rangefinder yet.

Bushnell did a really good job of thinking through the flaws of other rangefinders and found some genius ways to improve upon them.

Often switching back and forth between slope and no slope can be a bit cumbersome. It can also be problematic if you find yourself stuck in slope mode in a tournament and you forget how to turn it off.

With the Bushnell X2 you simply flip up the “Pro X2” logo on the side to reveal the words “slope edition”.

When you can see that, you know what mode it’s in.

It’s incredibly easy, intuitive and I love the more analog approach compared to the one button approach of most rangefinders.

This is something I didn’t even know I needed or wanted. But by simply hitting the silver Bushnell logo button on the side of the rangefinder you can easily toggle between a black display and a bright red display depending on your personal preference and lighting conditions.

I’ve found myself switching back and forth more often than I’d expect, in part because it’s just so simple to do.

The only thing that keeps the Bushnell Pro X2 rangefinder from getting a perfect score is it’s price. At $500 it’s a hefty price to pay, and considering the number of options out there for half the price or less – I think most casual golfers might go that direction.

That said, it’s worth every penny and if you golf a lot and want a rangefinder that will last you for years to come, I can’t recommend this one highly enough. In fact, I think it’s the best golf range finder of 2017.

And if you want to see how it stacks up against all the other rangefinders out there, see my comparisons here.