Of all the products I’ve reviewed here on Breaking Eighty, the Precision Pro NX7 rangefinder is one of the most popular. It hits a sweet spot with price and features that make it an attractive option for people looking for a solid golf rangefinder, without breaking the budget.

So when I got excited when I saw that they’d made some improvements to the model and released the Precision Pro NX9 HD earlier this year. I finally got my hands on it, and was able to put it through it’s paces.

So how does it stack up to the NX7? What about the best in show Bushnell Pro XE?

Read on to find out.

One of the first things you’ll notice about the NX9 HD is how similar it looks to the previous model.

The color scheme is the same, the size is about the same, and the packaging is really well done. 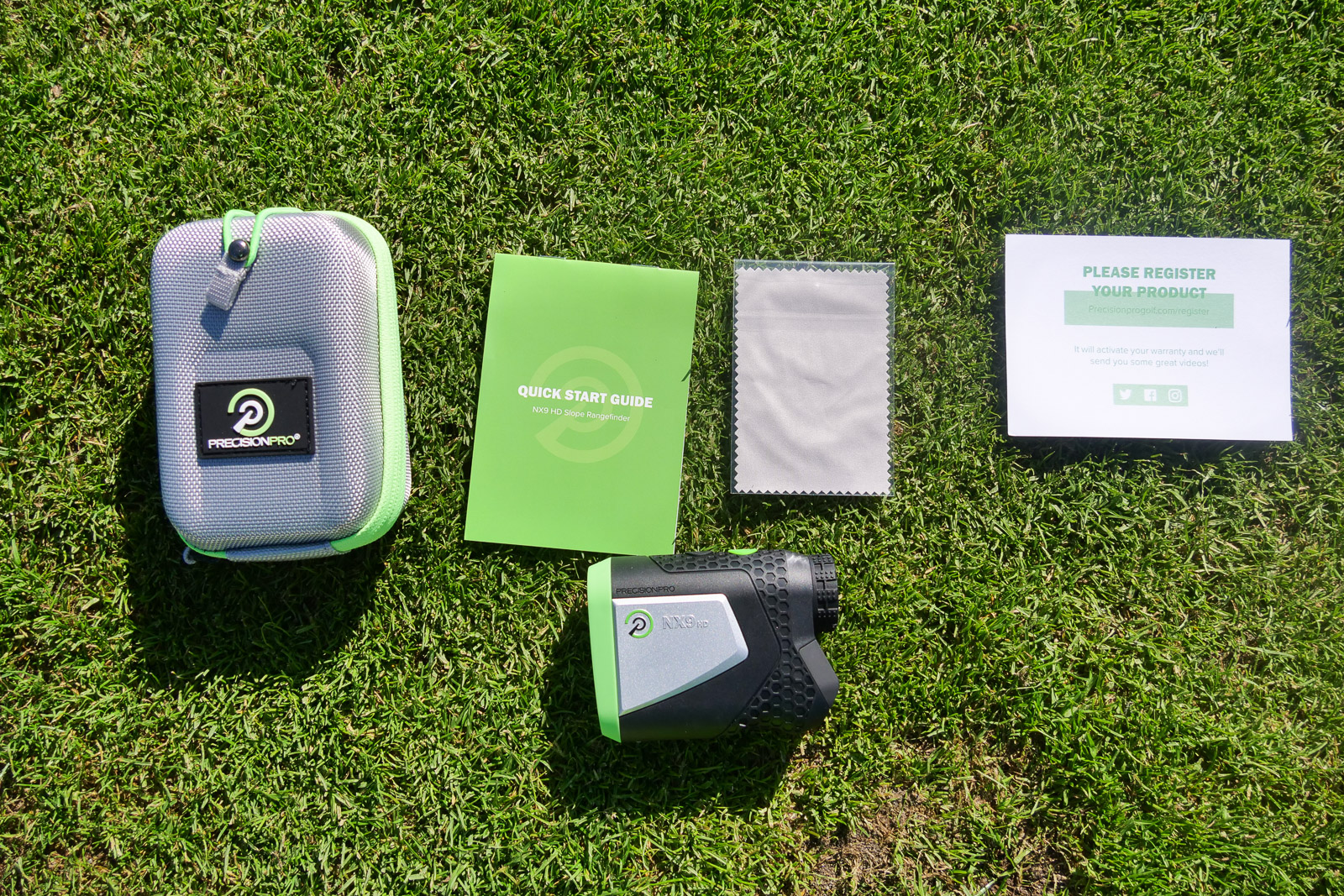 What you get when you open up the Precision Pro NX9 HD.

Out of the box you get:

For the last couple months I’ve been using the new Bushnell XE, so I think the first thing that surprised me when I took the NX9 out of the box was just how light it was.

It’s definitely smaller and lighter than the Bushnell, which for many people this will be a really good thing. The Bushnell is heavy. I attributed this mostly to the magnet that is built in, but the NX9 has a built in magnet as well – so it must have more to do with build materials and some of the electronics than anything else. First look at the NX9 when you open up the box.

Despite being heavier, I will say that the Bushnell feels much more expensive and durable than the Precision Pro. The NX9 build quality is great, it has a nice combination of plastic and rubber that is by no means cheap, but the Bushnell is a level above (that’s also why it’s over $200 more expensive). Compared to the previous generation NX7 it feels about the same. If you’ve used one of those, then you have an idea of what to expect with their newest model.

Note: Use the Code BREAKINGEIGHTY to get $20 off any Precision Pro Product on their site.

As I mentioned above, the Bushnell is quite a bit bigger – which is what I was used to using. It’s easy to grip your entire hand around it comfortably, but the NX9’s smaller profile took a little adjusting to since I wasn’t used to it.

I have fairly large hands, and I found the button placement to be just a little bit too close to the viewfinder for my natural fit when using my whole hand to shoot.

However, after a hole I made the adjustment to just gripping it with my thumb and first two fingers, and everything fell into place perfectly. The better way for me to hold the NX9 to make it easiest to use.

I should note, this isn’t a detraction from the product itself, it’s mostly just recalibrating from being more used to a larger form factor.

One thing I was also pleased with, was with the NX7 the device had a tendency to give a false reading if your hand was hanging over the base of the device – which would happen when holding it naturally. Once you learned to adjust, it was fine, but at one point I actually sent mine back for a replacement, thinking there was something wrong with it.

I’m happy to report I’ve had zero issues like this with the NX9 HD.

The viewfinder is easy to turn and focus for your eye, and the two simple two buttons make operation stupid easy.

There’s one button for shooting the flag, and another one for mode. If you press the mode button, it switches between slope and non-slope. If you hold the mode button you switch between yards and meters.

About halfway through my first round when I was comparing distances to the Bushnell XE, there was a particularly long, tricky shot that I was getting pretty wildly different numbers on, and I couldn’t figure out what the problem was.

It’s because I’d gotten the NX9 into “meters”. One quick hold of the mode button, and we were back to perfect distances.

The optics are quite good, and on par with the previous NX7 model. When comparing to the top of the line Bushnell model, they aren’t quite on the same level – but you wouldn’t think much about it you weren’t directly comparing it.

One usability critique I do have, is when you’re using slope mode, the slope number shows up well above the actual distance, and above the target zone. This forced me to shift my eye and my view to look at the slope number, as opposed to being able to clearly see everything centered right next to each other – which the Bushnell XE does well.

The display isn’t backlit like other models I’ve seen, but this rarely feels necessary and it’s easy to read the numbers.

That is the single most important factor in any golf rangefinder, and the NX9 does it well.

In comparing it to the NX7, there’s definitely a noticeable upgrade in speed. It gives you a reading almost instantaneously, which was great to see, and was on par with with every Bushnell I’ve ever tested in terms of speed.

The areas where it’s held back and shows its less expensive price point, come more in the way of some of the refinements to its use.

One knock I had with the vibration feature of the Bushnell Pro XE, is that I feel like it didn’t give it to me enough. I knew I’d be locked onto the flag but it didn’t give me that satisfying jolt every time telling me I did.

Well the NX9 goes the opposite direction. Every time I hit the button it vibrated, which is great at first, until you realize that the you couldn’t count on the vibration to be telling you you’re 100% locked onto the flagstick.

While it’s generally very easy to find the pin with the NX9, there are times I hit the trees in the background, or other objects, and it’d vibrate just like it would if I’d hit the flag.

Now this really isn’t a big deal, especially since the NX9 is so fast. You could hit the target button 3 times in under 5 seconds to ensure you’re getting the right number. The speed at which it gives you a reading is truly impressive, but sometimes you just have to be a little careful to make sure you’re picking up the right target.

On top of the speed, the feature I’m most excited about with the NX9 HD is the built in magnet. I raved about what a game changer this was with the Bushnell XE and I still feel the same way about it with the Precision Pro. Using the built in magnet to attach it to my clubs while walking.

Being able to attach it to your cart, or even your golf clubs is a game changer and a feature I love.

The magnet didn’t feel quite as strong as the Bushnell, but it also weighs significantly less, so it certainly is strong enough to keep it secured to whatever you want.

Overall the Precision Pro NX9 is a fantastic rangefinder at a great price.

It’s definitely an upgrade from the NX7, and worth choosing it specifically for it’s increased speed and built in magnet.

Does it outperform the high end Bushnell XE? No, the Bushnell is better in just about all regards, except price.

But here’s the thing, it’s not supposed to be better than the Bushnell. It’s almost HALF the price, and has nearly all of the same features.

Ok maybe it doesn’t have a built in barometric pressure sensor. But really? That might be the most ridiculous feature ever on a golf rangefinder.

The Precision Pro NX9 will attach to your clubs or golf cart, and then get you the exact same distance in about the exact same time that the Bushnell will – at over $200 less.

That’s what this comes down to.

The Bushnell may be sexier, and a little bit more enjoyable to use, but in the end they get you to the exact same place.

I personally love what Precision Pro is doing. We’ve seen all sorts of boutique, smaller companies in the golf world – but most of them are in apparel and accessories. There aren’t nearly as many entering the hardware space, and I love that the Precision Pro team has continued to invest in and iterate their product.

This is a solid step forward from their previous model, and if you’re looking for a full featured rangefinder at less than a full featured price, then I 100% recommend picking up the Precision Pro NX9 HD – it’ll last you for many years to come.

Want to see more of our recommended rangefinders? Check out our comparison of the best rangefinders in golf.

Learn more about the Precision Pro NX9 on their website, or buy here on Amazon.