Fishers Island Club: A *Very* Remote and Memorable Round of Golf

My journey to Fishers Island happened in a very unexpected way.

I was in New York City (you know, back when I used to travel), and saw that I had a friend from out of town who was also in the area on a golf trip.

I shot him a note saying something like “Hey, you’re in NY too?! Any chance you have time to get a round in?”

“Our schedule is pretty tight, but you know, we may actually have a spot for a forth on Wednesday. Let me check.”

“Can you make it to the New London ferry terminal by 7am Wednesday morning? If so, you can join us for 36 at Fishers Island.”

I’d be lying if I said that was the response I was expecting.

And the answer is? Of course. Absolutely, I will do everything I need to do to be at that ferry dock.

Getting to Fishers Island Club

The reality was a little more complicated than I’d hoped.

I got about 3 hours of sleep before hopping a cab in Brooklyn around 1:30am to head to Penn Station.

I boarded an Amtrak to New London which got me there around 4:30 in the morning. 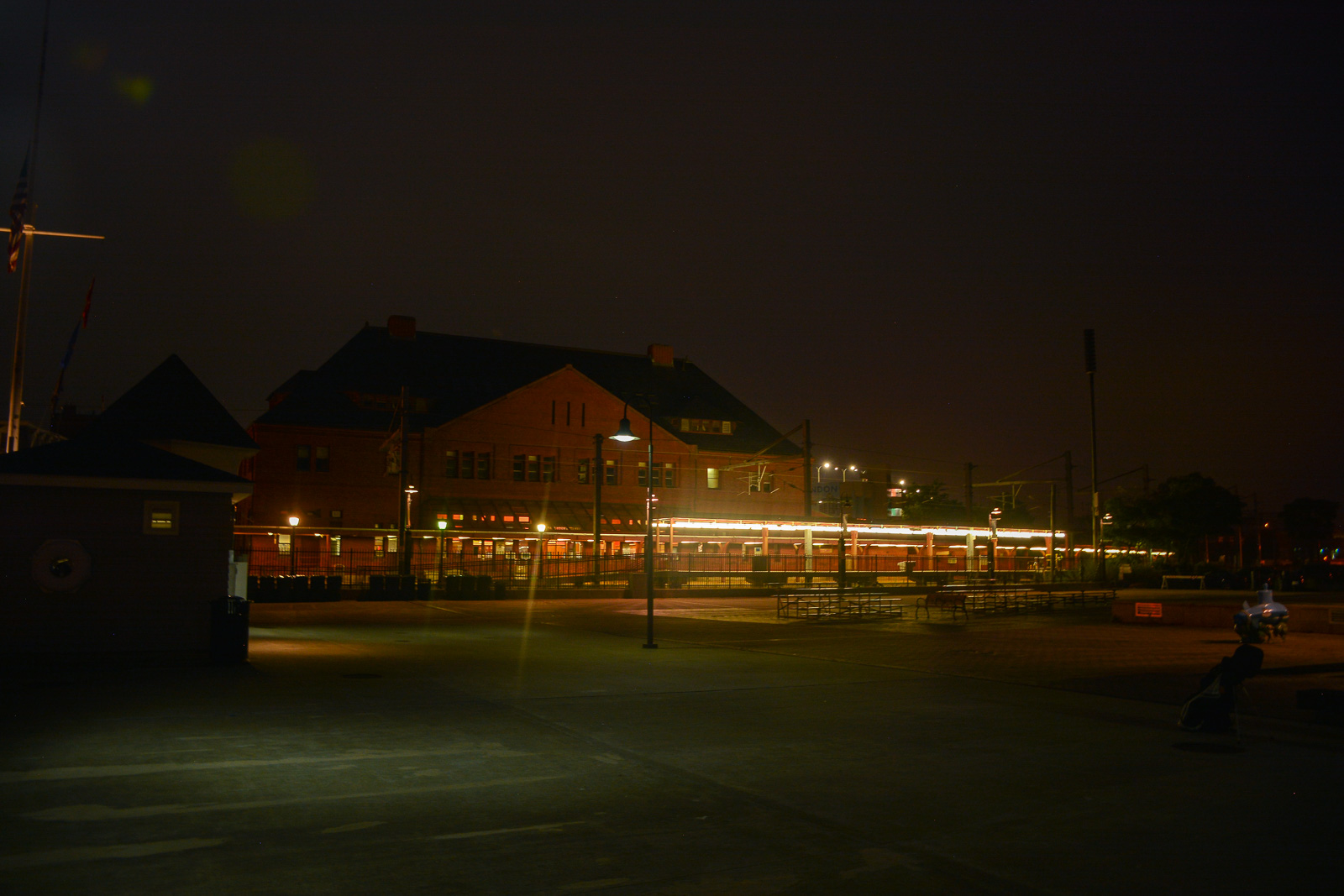 I then slept on a bench until about 6:30, when my friends arrived and we boarded the ferry with their car in tow.

We visited Fishers in late September after the summer crowds had left the island.

And I’ve gotta say, it’s kind of a surreal experience.

We stopped at a local convenience store to load up on coffee and snacks, and you definitely get the vibe that the island is from a different era.

It’s unlike any place I’ve visited. There’s an understatedness to the whole island, and if you’re an outsider? You kind of feel like an outsider.

When we arrived at the Club, there were hardly any people there and the skies were a dark grey overcast. Not exactly what you hope to see when playing an oceanside bucket list course. Little did we know what we were in for.

Fishers Island Club is often touted as one of the most difficult tee times in the country to get. And it’s not hard to see why. Some well-known, top 100 courses feel kind of like a factory.

Merion is a great example. Merion is one of my all-time favorite courses, and days of golf. But it feels like the majority of the play on the East is guest play.

A place like Fishers on the other hand feels like a special place, that’s truly for their members. 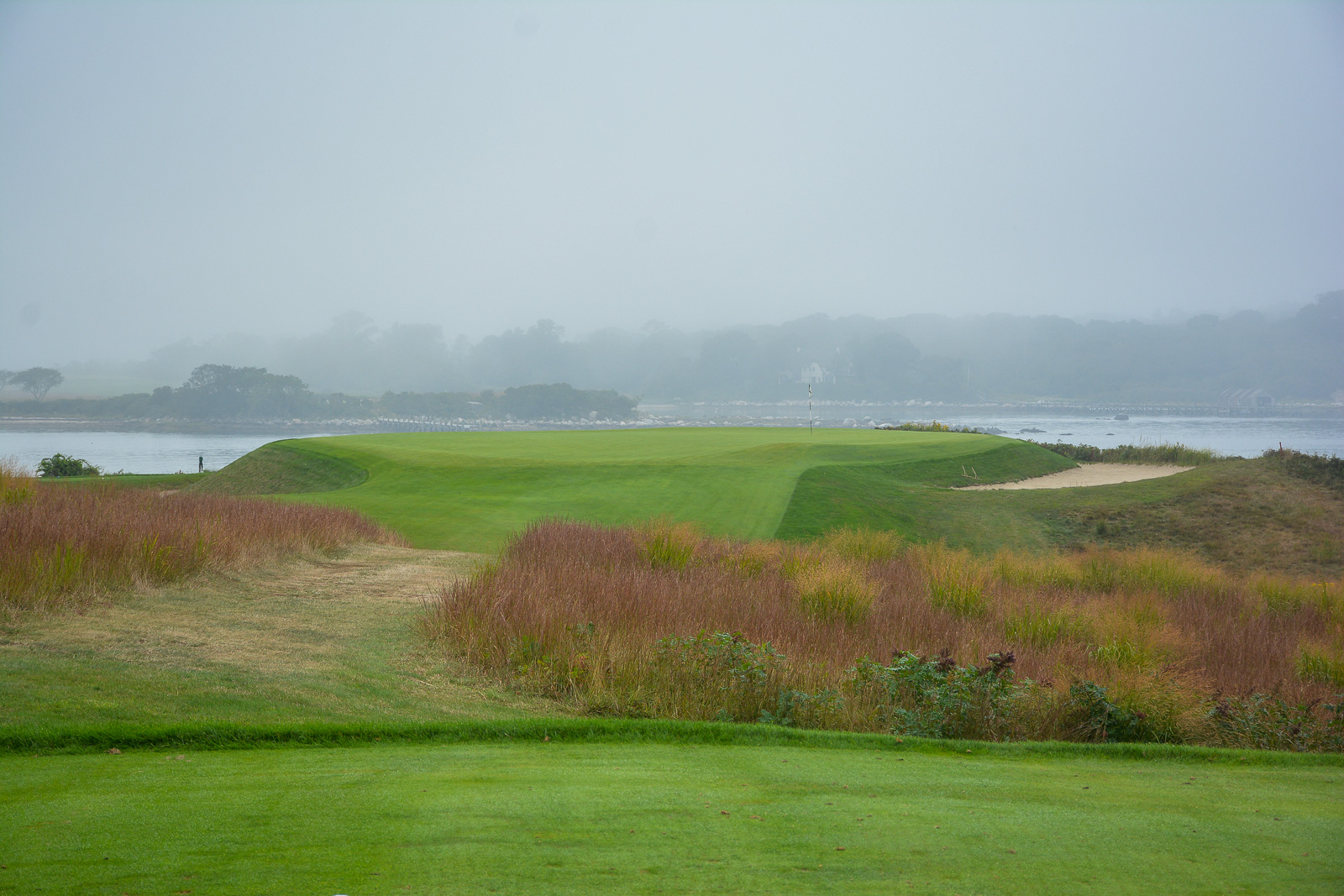 I’ve even heard stories of them writing a letter to the editors of Golf Magazine asking to be removed from their top 100 list.

In 2021 it’s a little bit harder for any Club to stay under the radar, but they’ve done a pretty good job.

This is in large part due to the undertaking it takes to get there.

You’re not just going to swing by the club and take some photos from the outside looking in.

If you’re making it all the way out to Fishers Island, chances are, you’ve got a tee time.

Fortunately, that was the case for me.

We played unaccompanied, didn’t set foot in the clubhouse, and due to the fog I’ll mention below, didn’t even really get to see that much of the course.

Yet it’s one of the most special days of golf I’ve ever had.

Fishers Island was designed by Seth Raynor in 1926. It’s short by modern standards at a reasonable 6,556 yards, but this is just fine by me. As a 12 handicap, anything longer than that simply means my score will be that much higher.

It features many of the template holes that Raynor and his mentor C.B. Macdonald are known for, and in some cases, has some of the very best examples of these holes you’ll find in golf.

But when you head to the first tee and stare out at the first fairway, it all feels, well, very unassuming.

Looking out at the first hole, you’ll likely see what feels like a big (sometimes brown) field. The opening hole at Fishers.

There isn’t much in the way of fairway irrigation at Fishers, so you’ll often find some discoloration and firm, fast playing conditions.

To the point, I’ve heard people complain about the conditioning at the club.

Sure it might not be the tight lines and bright green you see when watching the Masters, but the approach to maintenance is very fitting with the course.

A focus on how it plays over how it looks.

And believe me, you’ll have plenty of pretty things to look at when you’re playing a round at Fishers Island.

It’s also worth noting, the conditions were fantastic during our trip there.

Once you get to the second hole you start to get an idea of what’s to come.

You can see Long Island Sound out in the distance, and you’re treated to one of the most famous template holes: the Redan, modeled after the 15th at North Berwick.

The Redan at Fishers Island is much less severe than examples you might see at Yale, National, or Somerset Hills – but is still a great version of the hole. 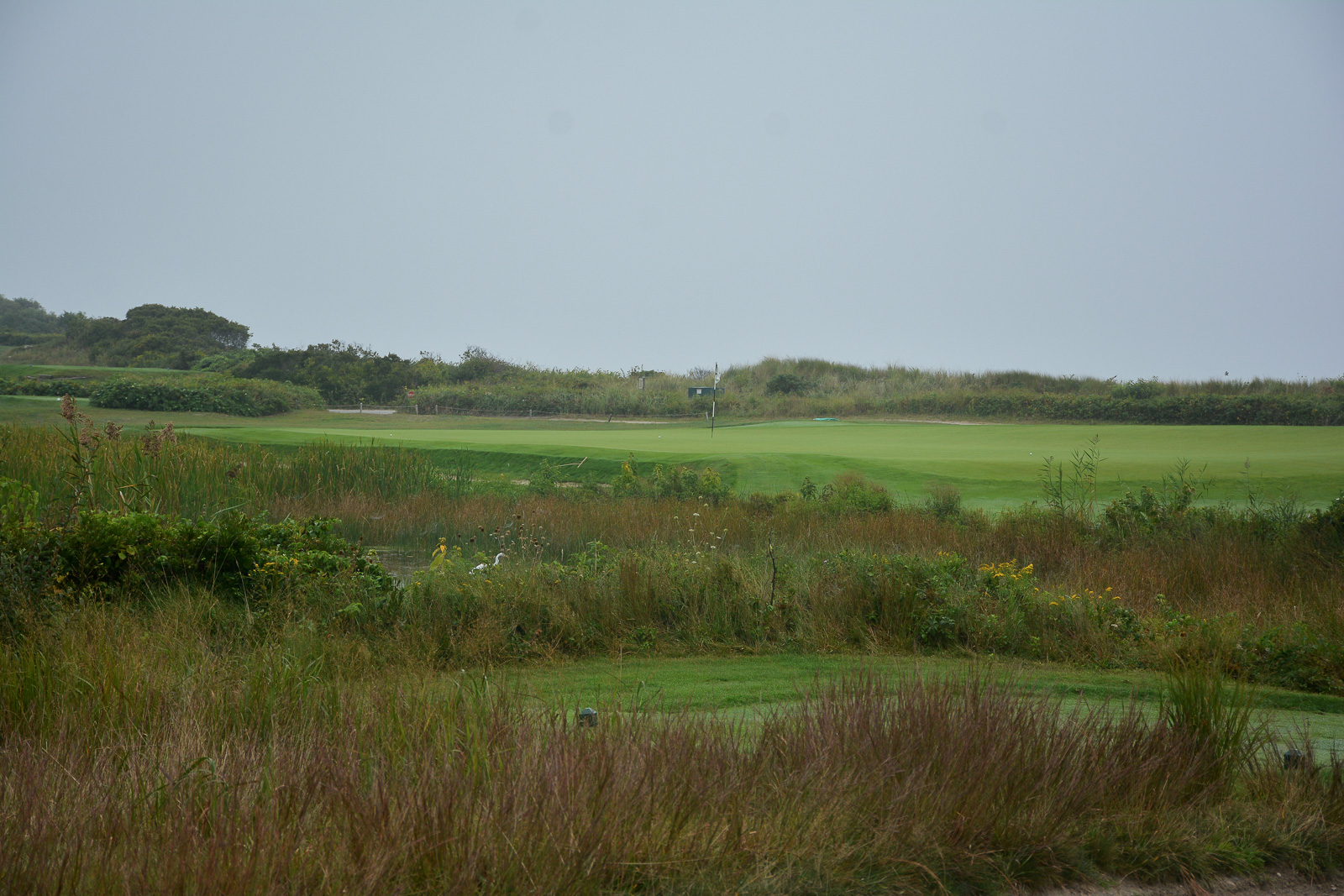 And then as you make your way to the third green of the “Plateau” hole, you begin to see why Fishers Island has become so revered in the golf community. 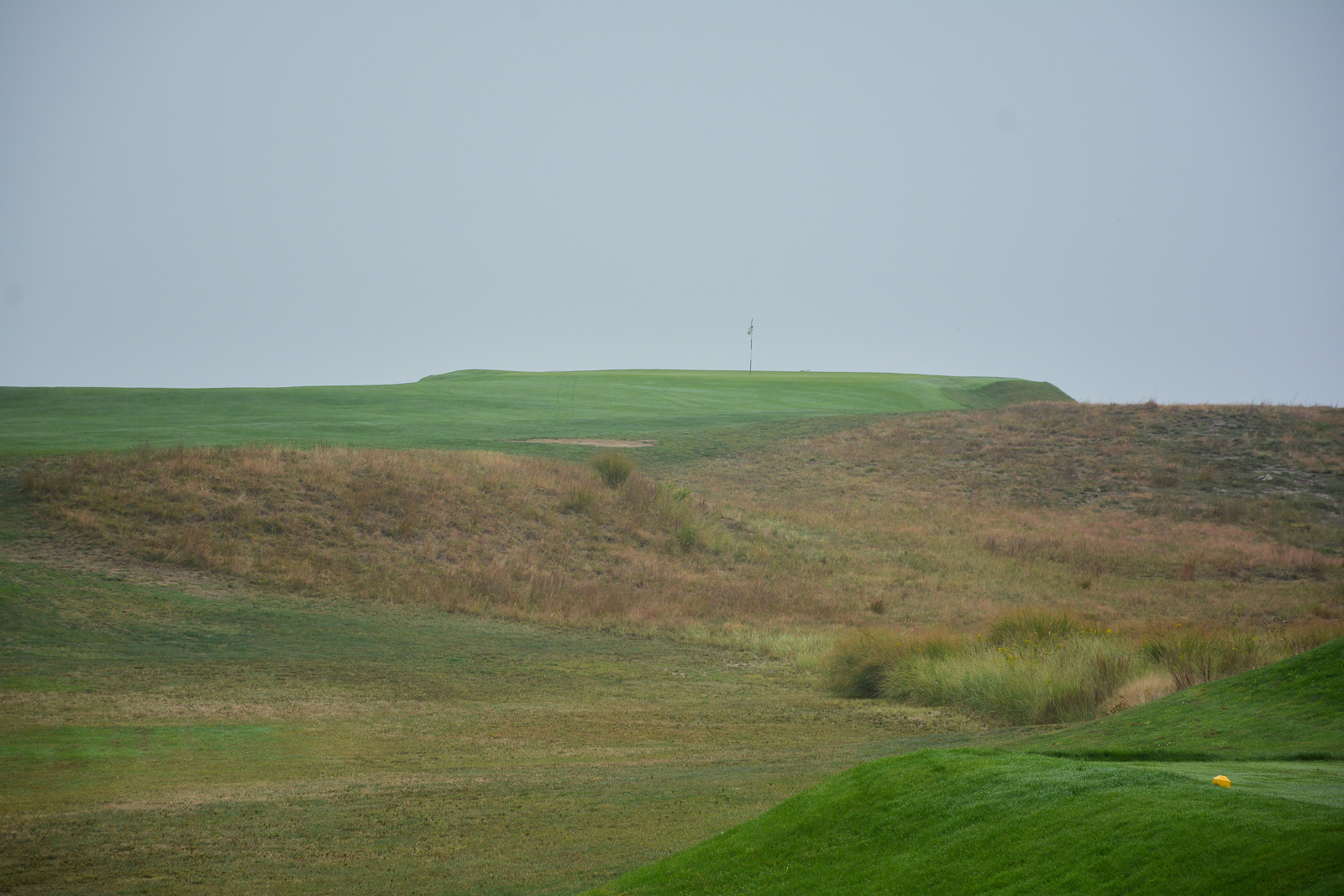 It isn’t due to an ostentatious clubhouse, tournament pedigree, or high price tag.

In fact, I have zero clue how much it costs to be a member at the Club – but I’d guess it isn’t nearly as much as you’d think it is for a place of this stature.

But good luck getting an invite to join.

It’s like Mid Ocean Club on steroids. Who’d expect to see a course built by such a famous architect, in the 20s, on an island 600 miles from any other land?

Fishers, despite being closer to land, feels even more remote. And many of its holes, are even more impressive than those at MOC.

Five treats you to what might be the best biarritz hole I’ve ever played. Certainly the most beautiful. The 7th, “Latimer” hole became a running joke with our group.

“Man, what an incredible Latimer hole this is. Best in the world.”

As far as I know, this is the only “Latimer” hole in the world. 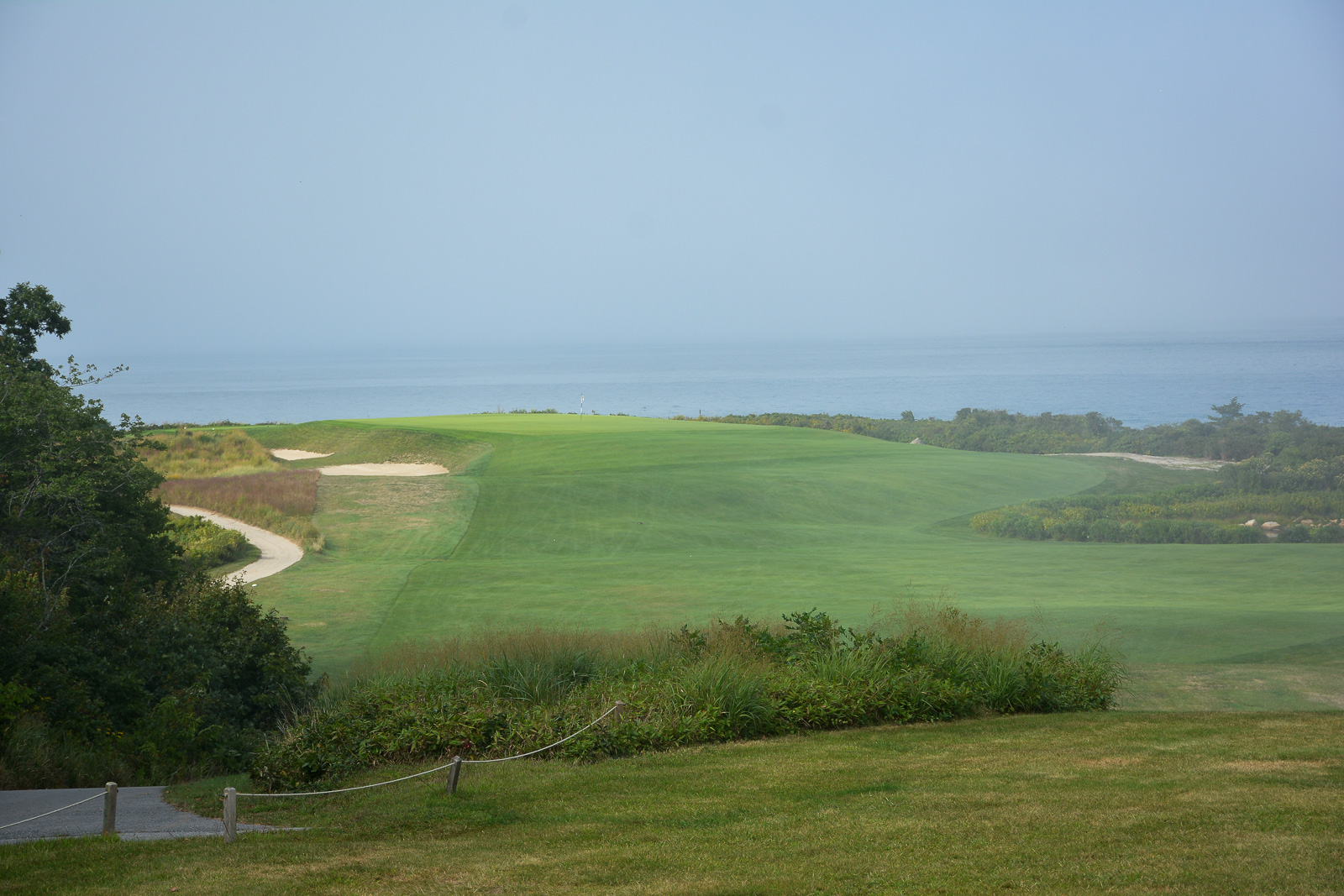 You could argue the 7th “Latimer” hole is the Signature Hole at Fishers Island. Speaking of best in the world, the “Double Plateau” 9th green is in the running for one my favorite greens in the world.

If you asked me to name my favorite, rapid-fire without thinking about it, this would likely be my answer. The 9th green, “Double Plateau.” I love this green so much.

As you make your way around Fishers you might find yourself occasionally feeling out of breath.

For what is a relatively flat island, there’s a surprising amount of elevation change on the course.

Much of this is brilliantly worked into the hole design, like on the wonderful 1oth “Knoll” hole with a steep walk up to the green. 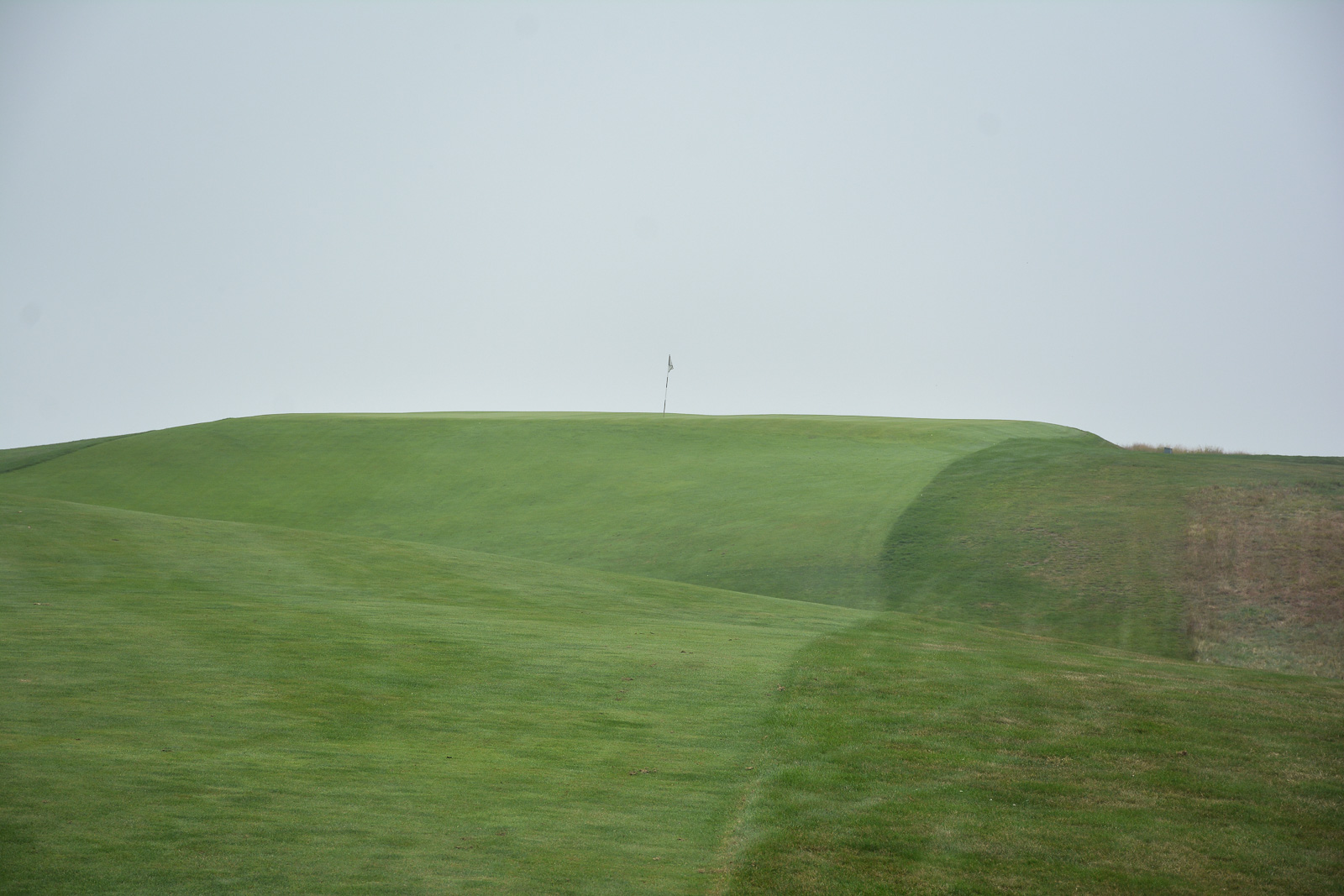 Or the phenomenal 4th Punchbowl. I spent a lot of time just standing and admiring that green site. Unfortunately, as you can tell from my photos of the day, the weather wasn’t on our side during my one visit here.

The plus is that it didn’t rain.

The minus is that, we couldn’t really see much. At all.

The exception was about a 30-minute window during our second round, where we saw some blue sky, and I was able to get great views of the 11th – 14th holes. 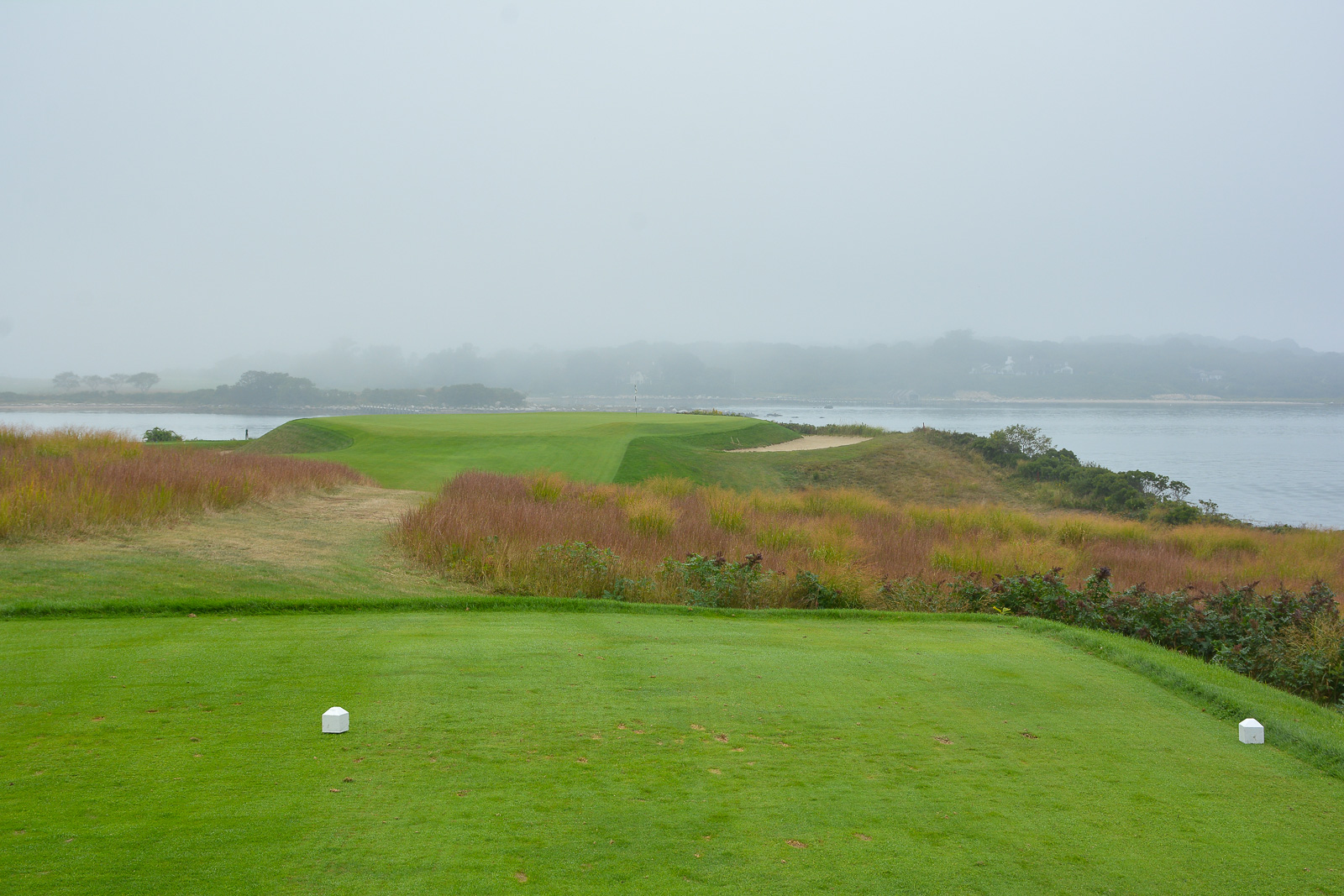 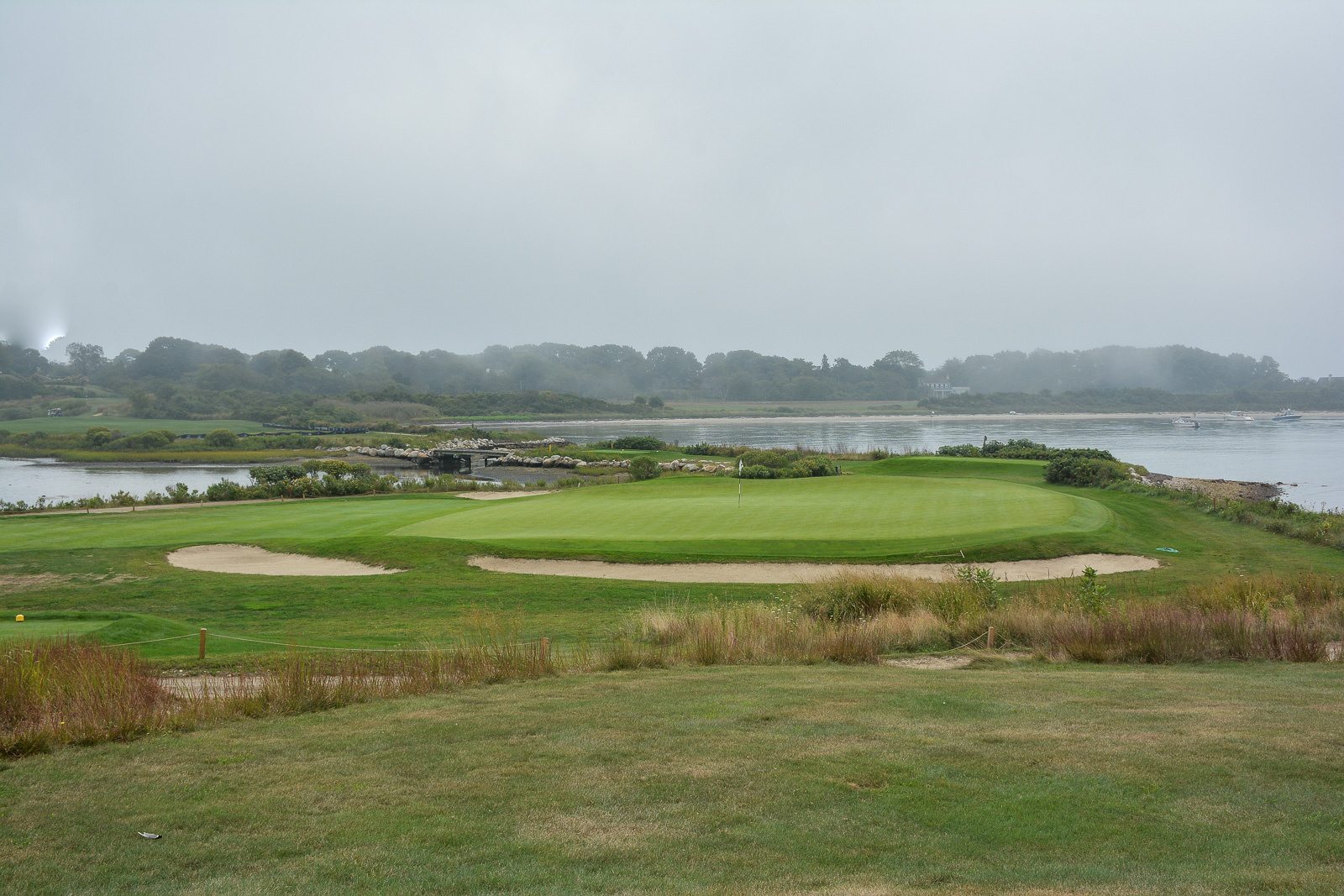 The approach on #12. The owner of that house is one very fortunate human. Behind the green on the 14th “Cape” hole. 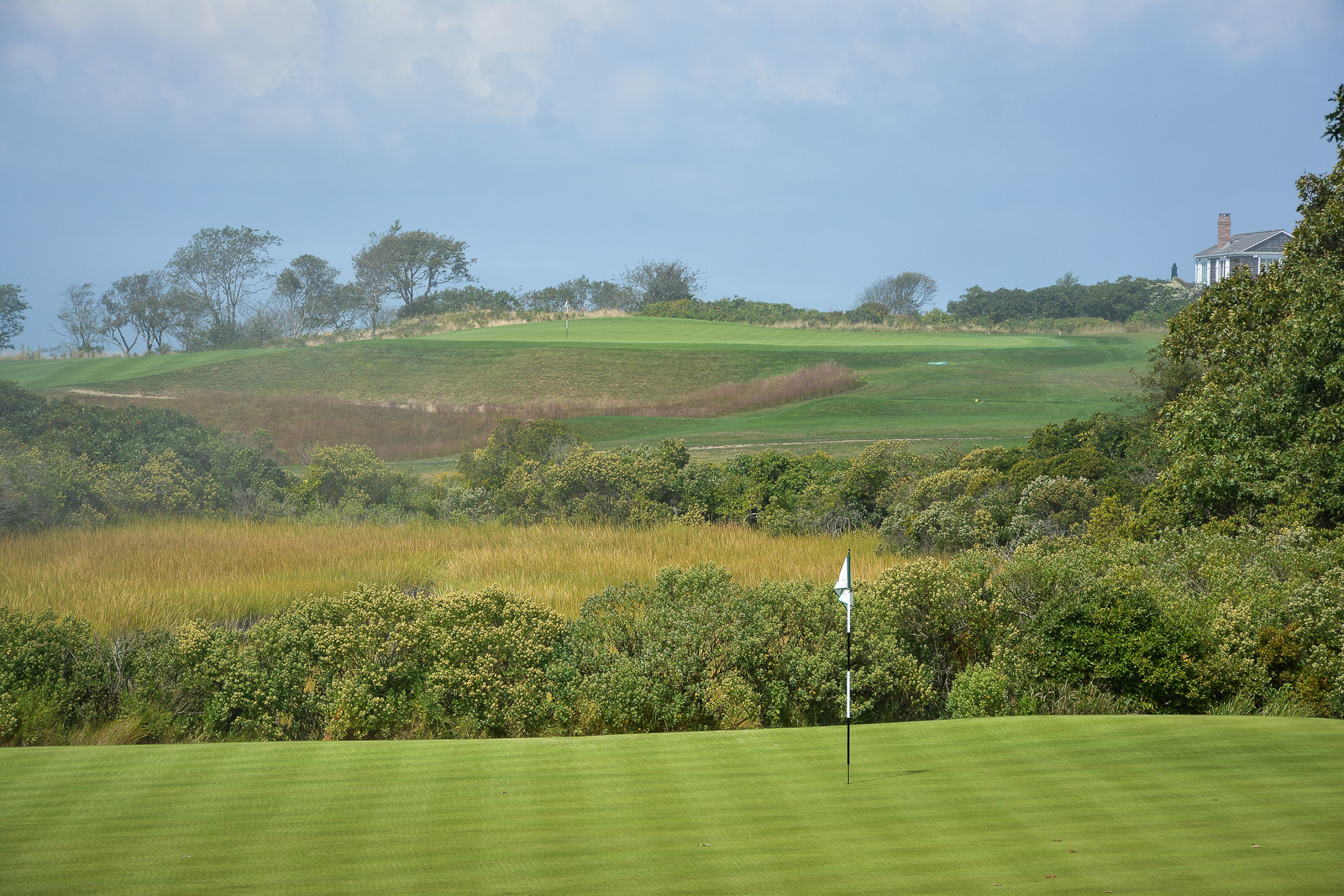 However, the fog did nothing to dampen our spirits.

After all, rounds like this don’t come around all that often (for most of us), so I was determined to enjoy every second of it.

If I had to compare Fishers Island to one other course I’ve played, it would be Maidstone.

Obviously, this is another very exclusive place, but there are some similar vibes on the course.

Both are from a different era. They aren’t long. They’ve got some quirk to them. They’re ok if the fairways aren’t a lush green. They’ve got insane views. And despite very well-heeled memberships, everything on the course feels understated. 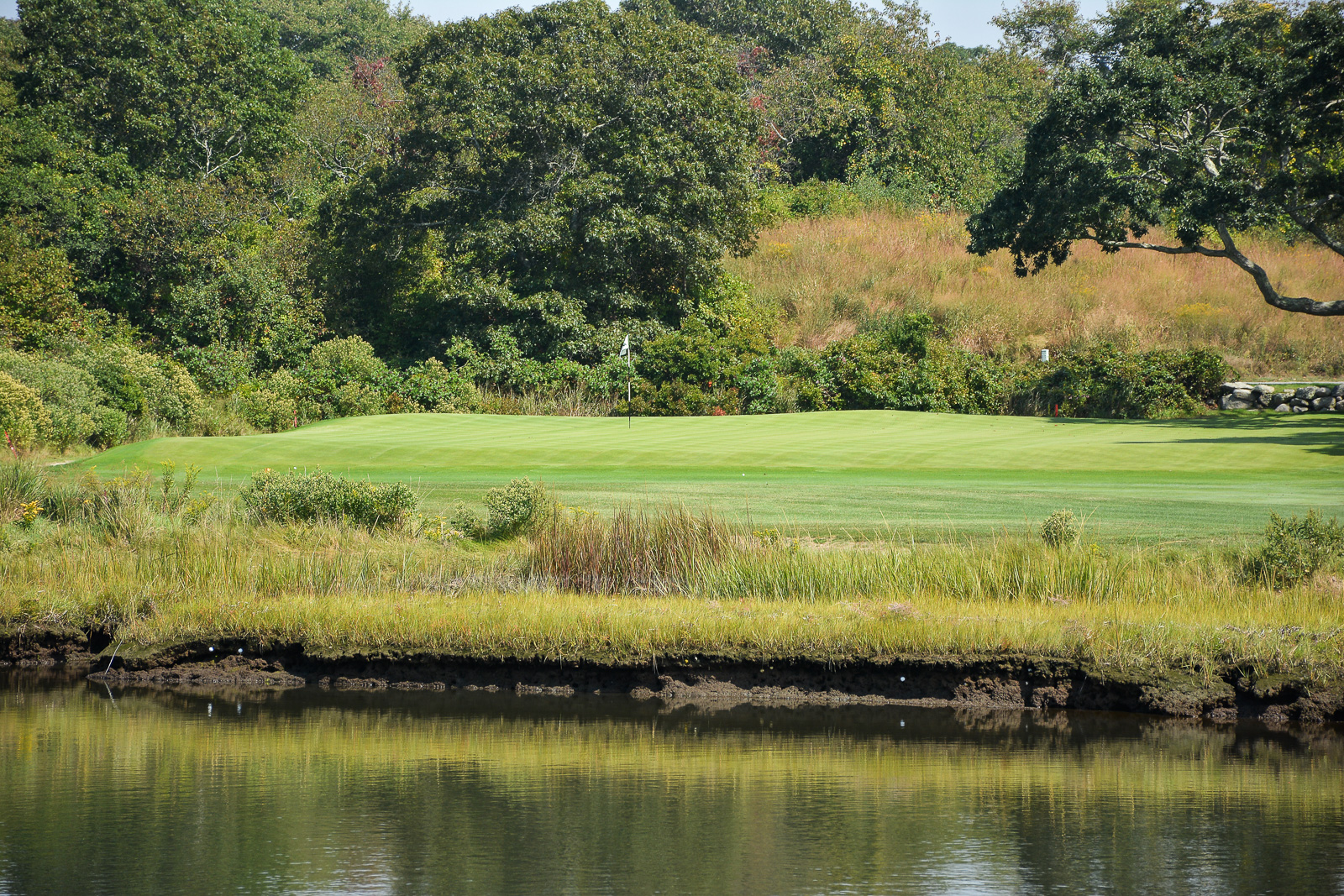 With most rounds I play I feel like I can get excited for the next time I’ll be back.

But with Fishers Island? I legitimately don’t know if I’ll ever have the opportunity again.

It’s a small membership, it’s about as hard to get to as any course in America, and with so many people clamoring to play it these days, I imagine it will make opportunities to do so that much more difficult.

But I’m thankful for the chance I had to visit.

Golf is such a special game. It takes you to places you’d never expect to visit with people you’d be unlikely to meet otherwise. 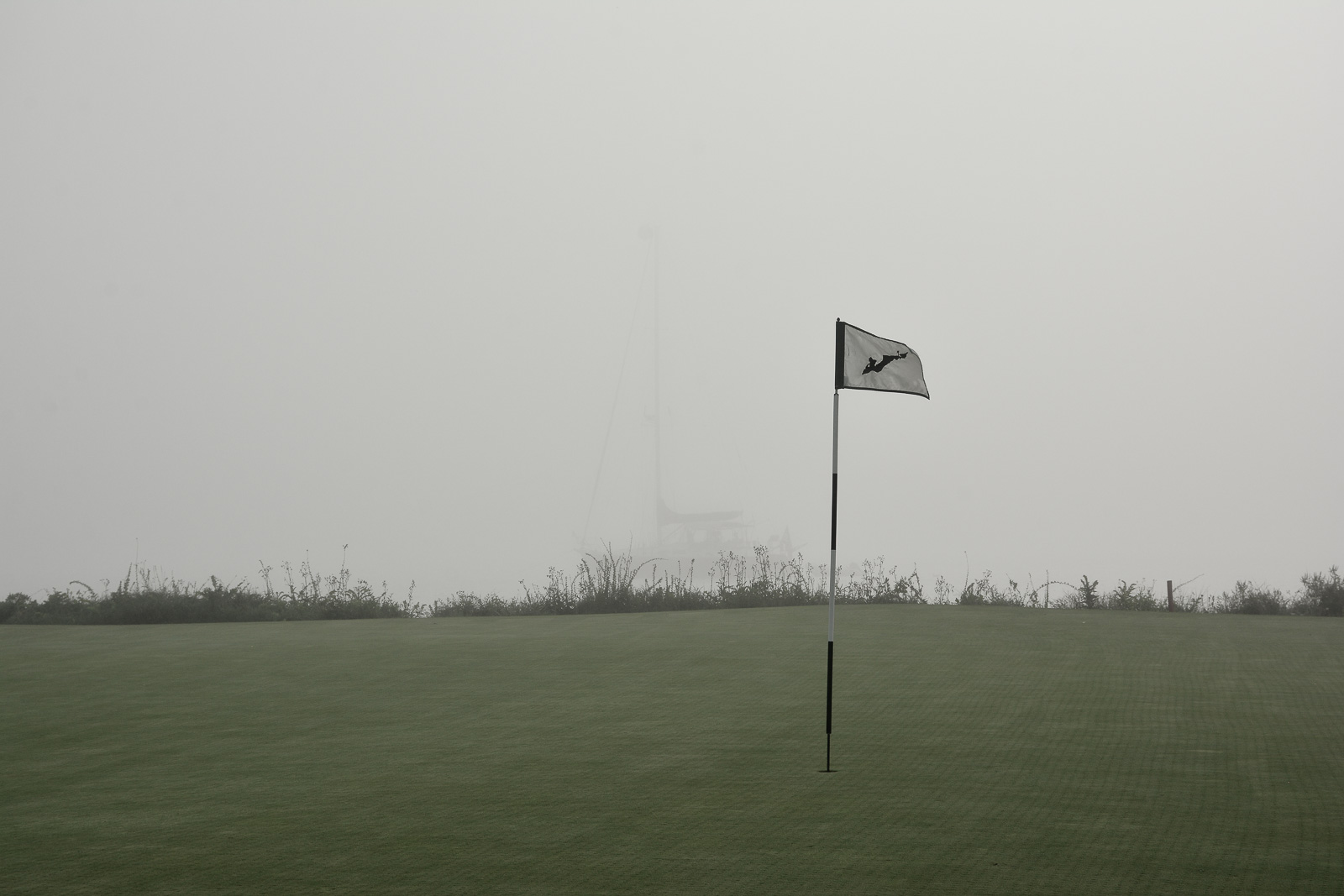 As I got in the car, and boarded the ferry, and waited for the train, and endured the 3 hour ride, and hopped on the subway to go back to Brooklyn – I thought about all of this.

About how a 24-hour whirlwind journey to a tiny island, thousands of miles from my home, to hit a little white ball around a waterfront field, became one of the most memorable days of my life.

And when you have the opportunity to visit Fishers Island Club? I imagine it will become one of the most memorable of yours as well.

Can’t find a way on? Here’s the list of the rest of the best golf courses in New York.