Blast Motion Golf Review: A Ton of Tech in a Tiny Package

Quick question for you: how much of your practice time do you actually feel like you know what you’re doing?

For me when I’m on the range, I usually have one swing thought I’m working on, but it’s highly debatable as to whether or not that thought is actually the proper way to be doing something.

(This is changing as I’ve spent more time with RotarySwing, but I’ll save that for another review).

But let’s face it, most of us are clueless when we practice.

And that is one of the problems that Blast Motion’s Golf Sensor sets out to solve, and it does a great job of that.

What is Blast Motion Golf?

In simple terms, Blast Motion is a sensor that you can attach to your golf club to get an incredible amount of motion capture data about your golf swing.

It then pairs with an app that will give you instant feedback about your swing so you can practice more effectively and make changes based on real information rather than guesswork.

In the early days of this blog, I tested and reviewed a number of different swing sensors. Some I liked (Zepp), some I didn’t (SwingByte), so I was really curious to see how Blast Motion would stand up against those.

Upon opening the box, you get the sense that Blast Motion is a high end product that’s well made. The packaging is very nice, and out of the box you get:

I was a little surprised when I opened up the device to see how small it was. It’s a small disc that is about the size of 5 quarters stacked on top of each other.

I was under the impression that Blast would have a screw on the bottom of it, that you would insert into the top of the club like the older Arccos Sensors.

You need a special rubber holder that you place over the club, and then put Blast Motion inside of it.

It comes with two different grip attachments, one for regular clubs, and one for oversize putter grips.

Taking the attachments on and off the clubs, and adding Blast to it is a little cumbersome at first, but once you’ve done it a few times it’s really pretty simple.

The wireless charger works great, you just need to make sure you remember to get it charged before you head to the course. There’s an LED light to indicate if the device is charging, or fully charged. Battery life I’ve found to be solid, and I was able to get multiple sessions in between charges. 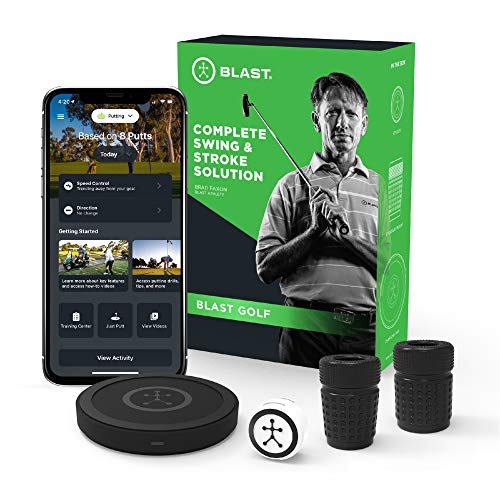 Blast Motion is one of the best ways to track the intricacies of your golf swing. It works especially well for getting your putting stroke on plane, and is a fantastic way to practice on the range, on the putting green, or even better, at home.

Buy on Amazon
We earn a commission if you click this link and make a purchase at no additional cost to you.

As suggested by the app, I started out using it on my putter. I’d definitely recommend doing this as it gives you a chance to become familiar with how it all works.

Also if your swing is as bad as mine, you’ll find your metrics are far from ideal, and it’s a lot easier to make small tweaks to your putting stroke than it is if you’re going full-on driver.

When I first got it paired and started using it, I hit a period of time after 4 putts where it wasn’t registering anymore. It took me about 15 minutes of confusion and frustration to figure out what was going on.

But what I finally concluded is that it wasn’t quite sitting right on my club. I finally adjusted the rubber attachment and took out the sensor and put it back in, ensuring it was fully flush on the bottom of the club, and I never had the issue again.

Once I got it fixed, I was actually happy this happened, as I would rather have it not work at all, than work and give me false readings – as that would negate the whole point of having it.

For me, having the sensor on my club didn’t really bother me at all and for the most part I didn’t notice it after a few swings.

But I know there will be people who read this who have concerns about it and the weight it might add to the club (I’ve had a lot of comments about this fact with Arccos Sensors over the years).

On your putts, while there’s a lot of information, the primary thing it focuses on is helping you get your tempo right and rotation change (making sure you’re club face isn’t too open or closed at impact).

So for 99% of people this won’t be an issue, but if you’re one of those people you feel like you notice every extra gram of weight on your club, you may want to try out Zepp instead.

It works really well when you’re using the sensor as it will color-code each metric so you can see if you’re within the proper range based on your handicap.

What I found frustrating though was when reviewing swings after the fact, everything was one color. So I couldn’t at a glance see if swings I’d made during my last practice session were good or bad.

As someone who isn’t overly analytic with the statistics of my golf game, I want as much handholding as possible to ensure I actually know what data I’m looking at.

On full swings the sensor works very well, also. Again, I found it most useful for working on my tempo and the ratio between my backswing and downswing.

I will say, if you’re just a casual golfer who doesn’t want to dig into the nitty-gritty of your golf swing – Blast Motion may not be the best fit for you. You may be better off with a tool like SwingCaddie to make your range sessions more enjoyable and a little bit more focused.

There’s a lot of data and numbers, and it could be too much for the average golfer.

That said, if you really want to fine tune your swing, and specifically really dial in your tempo, swing speed, and club face angle – then this is the best swing tracker I’ve used.

After a couple sessions with it, I found myself being able to much more consistently replicate my good swings with proper tempo, and I was able to square up my club face on my putts much better.

One feature of the app that I liked way more than I expected to was the video feature.

You can add a video to any of the swing you make and it will allow you to go frame by frame in slow motion to see every excruciating detail of your golf swing.

Being able to see the data right next to each swing I found to be really useful, and I learned things about my swing that you simply can’t always figure out on your own.

I’d recommend bringing a tripod of some sort when going out for a Blast Motion session, as my cumbersome methods of trying to balance my phone on my golf back or a range basket simply didn’t work very well.

For the right person, this Blast Motion Golf is an excellent device. I found myself liking it more than Zepp, and I like the fact that it attaches to the club rather than your glove.

It’s also a great tool to be able to use for indoor golf practice at home if you can’t make it out to the course.

The app itself can be a little bit overwhelming at first, but once you’ve had a session or two it becomes second nature to use.

At $149 the price point is solid based on the level of detail it gives you into your swing. It’s a fraction of what you’d spend on a trackman, and while obviously those are two very different systems, you can get a lot of the same data.

Frankly, a Rapsodo or Mevo and Blast Motion is like a poor man’s trackman combo, and still gives you a tremendous amount of info.

So if you’re in the market for an analytics sensor that will give you the feedback necessary to make small changes in your swing, look no further than Blast Motion – you’ll be glad you did.

Blast Motion is one of the best ways to track the intricacies of your golf swing. It works especially well for getting your putting stroke on plane, and is a fantastic way to practice on the range, on the putting green, or even better, at home.

Buy on Amazon
We earn a commission if you click this link and make a purchase at no additional cost to you.