Throughout the course of my Golf Road Trip there was one place that people in both Michigan and Wisconsin would ask me about.

“Have you been to Forest Dunes yet?”

For a course that I was thinking was relatively obscure, everyone seemed to know about it, and more importantly, they all seemed to have nothing but amazing things to say about the course.

Needless to say, I’m glad that we added it to the list.

Forest Dunes is, how shall we put this…remote.

We drove in from Elk Ridge (also in the middle of nowhere) where we played the previous day and it was all backcountry roads without an interstate to be seen.  This isn’t a bad thing at all, but it’s something you should be prepared for if you’re planning on making the trip.

Like many other developments in the middle of the last decade, it was originally planned to be a two course private club.  With the economy and such, that didn’t materialize quite as expected, and after a couple of owners it has landed at where it is now: The conditions, quality, and experience of a private club – that’s open to the public.

I don’t think I can describe it any other way.

It was the most well manicured course I played on the entire trip.  The greens were lightning fast. And every single person we came into contact with genuinely seemed interested in us and making sure we had the best time possible.

We arrived the night before our round and stayed in their new Lake AuSable Lodge.

While not huge at 14 rooms, it was exactly what we wanted. Simple but very tastefully appointed rooms, and the first tee was about 25 yards off of our back porch – not too shabby.

The food at Forest Dunes was the best of all the Michigan courses we played, and walking out at sunrise the morning of our round was easily one of the most magical views I’ve ever seen. 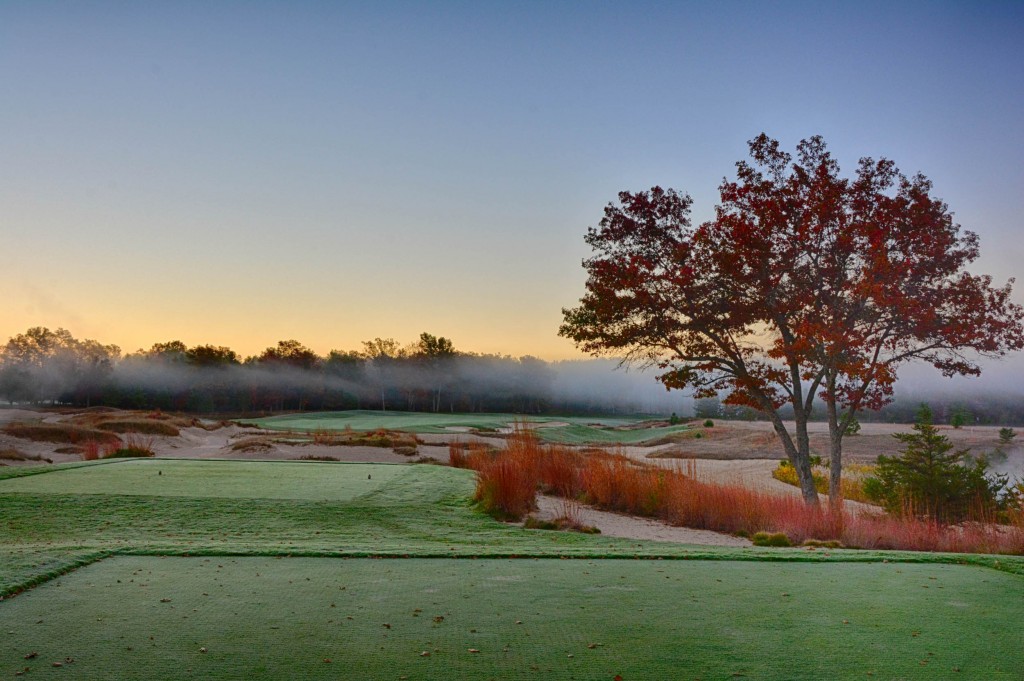 We ended up with a bit of a frost delay, which actually worked to our advantage.  We got a chance to take our time with the included breakfast, and experience the full range of practice facilities at the course.

We played from the ii/iii combo tees which measured at 6309 – so all distances will be from there.

Not overly difficult, a long dogleg right where you get to decide how much you want to bite off over the waste area on the right. Careful, as if you decide to go directly over the right bunker you’l need a pretty decent amount of carry to clear. Neither Dan or I did. So this is where the “Forest” comes from in the name? Absolutely gorgeous golf hole thats a long dogleg left. There’s a bit of a bailout on the right if you don’t want to go over the left bunker for a left pin placement. 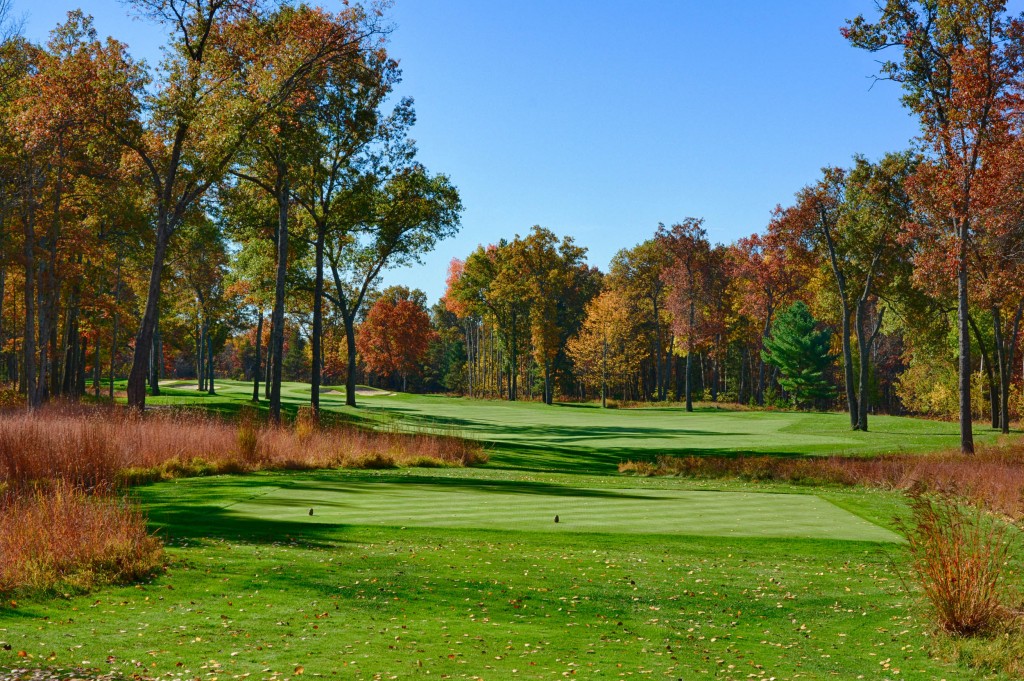 Welcome to the Forest!

Short to mid length par 3 with trouble by way of bunkers all around the green.  Even though the front 9 is considered the forest part of the course, the big bunker in front of the tee box doesn’t let you forget that the dunes are a big part of what make this golf course special. Pretty straight forward dogleg right. Be careful off the tee as balls that end up in the right trees are pretty much gone. I was feeling pretty conflicted at this point. The course was absolutely gorgeous. I was blown away with how well maintained it was. But with the possible exception of the River Course at Blackwolf Run, these were the fastest greens of the trip – and boy did I have trouble with them. This would be my 4th 3 putt in a row – not exactly how you want to start out a round.

This was also a tricky par 5. At 521 yards (567 from the ii tees), it’s a pretty solid 3 shot hole – especially given the fairly sharp dogleg left. Between the 1st and 2nd shot.

Play it smart with a 3 wood off the tee. You know, or bomb it over the tree on the left and hope for the best 🙂 This is a really cool, but somewhat deceiving hole. If you haven’t played it before, it can be tough to understand exactly what to aim at off the tee.

You’ll see a big tree in what looks like the middle of the fairway and some bunkers.

You’ve got options, its not a long hole, so you can go mid iron, mid iron and probably be just fine. But for a shorter approach and a more fun tee shot, pull driver and just watch the slice as there are a few right side bunkers you can’t see from the tee. Go ahead, take out the driver 🙂

I got lucky on “Goal Posts” – the name for the par 5, 7th. I went three wood off the tee and clipped the overhang tree. I punched it up the fairway and still had a 200+ yard approach shot, with which I had to clear the goal posts guarding the green.

Totally reachable, and with no major trouble directly in front of the green, you’ve got a good shot at birdie with a couple of solid long shots. One of the toughest holes on the course. A sharp dogleg right, with a big bunker at the corner – pretty much exactly where I’d want to hit it with my fade.

The green is much more protected than you think. The water extends way up the right and there’s a bunker that will catch everything long. So play with both eyes open on this one. Slightly intimidating as 9 plays over water directly in front of the clubhouse. Oh, and then there’s the plethora of bunkers to avoid if you get it past the water. The #17 handicap hole on the course, but don’t let that lure you into a false sense of comfort.

One of my favorite holes on the course. This is arguably one of the most unique holes on the course. There’s split fairways that are separated by a giant bunker.  If you manage to avoid that, on your approach shot, pay close attention to which side of the green the pin is on, as there’s a bunker that splits much of the green – making it a very difficult two putt if you’re on the opposite side. This sums up Forest Dunes perfectly.

Dunes in the front. Forest in the back.

Oh and a blazing fast green – but most of them are.

No really, I’d imagine this is what putting at Augusta is like. I had 8 3 putts during my round. I hit 50% of the greens and still only shot a 97.

Luckily 11 is fairly benign as far as this course goes, so enjoy it, and remember that short is better than long as you have a bit of room in the front of the green. This is another favorite. Off the tee it’s a straight away, narrow shot. Avoid the bunkers on the left, and you should have a good shot at the green which is a really fun approach. Trees and bunkers in back and a lake that comes out from the right to guard the green. Straight forward, mid length par 4.  Trees on both sides, so use whatever club is going to get you in the middle of the fairway. That said, you have a little more room on the right if you get it out far enough, but there’s also a tree that can block your approach depending on the pin placement. A long, difficult par 4.  The fairway is narrowed by a bunker and water right in the middle of the landing area for your drive. The lake on the left works it’s way all the way up to the green and a strategically placed bunker in front of the shallow green makes far left pin placements particularly scary. Mid-length par 5 with a big (and scenic) meadow carry off the tee. A fairly straight forward hole, until you get to the green which is slightly below the level of the fairway. Makes for an interesting feature, and not sure if it is, but it felt like one of the smaller greens on the course. Named Hell’s Acre paying homage to “Hell’s Half Acre” at the #1 course on the planet, Pine Valley.

The green is tough, and the course isn’t made any easier because of it’s length – the longest par 3 on the course. Probably my favorite hole on the course.

A short par 4, that begs you to hit driver, although an iron or hybrid is easily the smart play.

There’s a wide fairway in front of the green, and room behind as well. But with bunkers heavily guarding your approach, you’ll have to hit one hell of a drive to land the green here.

I’ll leave it up to you to decide if you want to hit the smart shot, or the fun shot. After all, you didn’t drive all the way out here for nothing! Let it rip! You know, or be smart.

A fantastic finishing hole. Waste area on both sides of the fairway, that is heavily guarded by bunkers on the right of the green, and water all to the left and behind. Fairway narrows at about 300 yards out, but shouldn’t be too big of an issue. If you’re getting it close to there, then this whole will definitely live up to it’s name: “Eagle Chance”. This is one of the absolute coolest features I’ve seen on any course yet: The “Bye” hole. Although many refer to it as the “Buy” hole.

It’s the 19th, bet settling hole. A short par 3 with a bunker smack in the middle of the green.

Not to miss an opportunity Dan bet lunch. I landed in the back bunker, and he flubbed a short chip, luckily leaving us both wit bogeys. I dodged a bullet, but it was a fantastic addition to a fantastic course.

In the end, we both agreed that Forest Dunes was one of our favorite courses.  Just this year it barely fell off of the Top 100 Courses list (it’s currently 113 on the Second 100 list), but don’t be fooled, it’s just as good as any course on the top list – and probably better maintained.

Their motto states this is “bucket list golf” and you know what, it truly is. Don’t miss this if you ever find yourself in northern Michigan, and I can’t wait to head back and play it again.